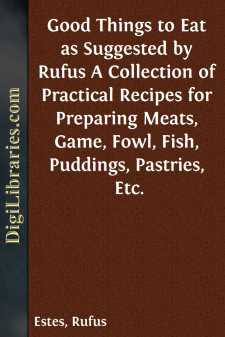 SKETCH OF MY LIFE

I was born in Murray County, Tennessee, in 1857, a slave. I was given the name of my master, D. J. Estes, who owned my mother's family, consisting of seven boys and two girls, I being the youngest of the family.

After the war broke out all the male slaves in the neighborhood for miles around ran off and joined the "Yankees." This left us little folks to bear the burdens. At the age of five I had to carry water from the spring about a quarter of a mile from the house, drive the cows to and from the pastures, mind the calves, gather chips, etc.

In 1867 my mother moved to Nashville, Tennessee, my grandmother's home, where I attended one term of school. Two of my brothers were lost in the war, a fact that wrecked my mother's health somewhat and I thought I could be of better service to her and prolong her life by getting work. When summer came I got work milking cows for some neighbors, for which I got two dollars a month. I also carried hot dinners for the laborers in the fields, for which each one paid me twenty-five cents per month. All of this, of course, went to my mother. I worked at different places until I was sixteen years old, but long before that time I was taking care of my mother.

At the age of sixteen I was employed in Nashville by a restaurant-keeper named Hemphill. I worked there until I was twenty-one years of age. In 1881 I came to Chicago and got a position at 77 Clark Street, where I remained for two years at a salary of ten dollars a week.

In 1883 I entered the Pullman service, my first superintendent being J. P. Mehen. I remained in their service until 1897. During the time I was in their service some of the most prominent people in the world traveled in the car assigned to me, as I was selected to handle all special parties. Among the distinguished people who traveled in my care were Stanley, the African explorer; President Cleveland; President Harrison; Adelina Patti, the noted singer of the world at that time; Booth and Barrett; Modjeski and Paderewski. I also had charge of the car for Princess Eulalie of Spain, when she was the guest of Chicago during the World's Fair.

In 1894 I set sail from Vancouver on the Empress of China with Mr. and Mrs. Nathan A. Baldwin for Japan, visiting the Cherry Blossom Festival at Tokio.

In 1897 Mr. Arthur Stillwell, at that time president of the Kansas City, Pittsburg & Gould Railroad, gave me charge of his magnificent $20,000 private car. I remained with him seventeen months when the road went into the hands of receivers, and the car was sold to John W. Gates syndicate. However, I had charge of the car under the new management until 1907, since which time I have been employed as chef of the subsidiary companies of the United States Steel Corporation in Chicago.

It is always necessary to keep your kitchen in the best condition.

Breakfast—If a percolator is used it should first be put into operation. If the breakfast consists of grapefruit, cereals, etc., your cereal should be the next article prepared....