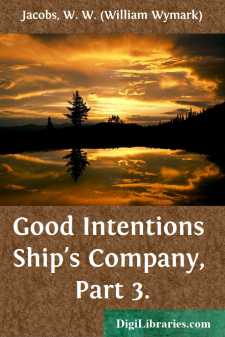 "Jealousy; that's wot it is," said the night-watchman, trying to sneer— "pure jealousy." He had left his broom for a hurried half-pint at the "Bull's Head"—left it leaning in a negligent attitude against the warehouse-wall; now, lashed to the top of the crane at the jetty end, it pointed its soiled bristles towards the evening sky and defied capture.

"And I know who it is, and why 'e's done it," he continued. "Fust and last, I don't suppose I was talking to the gal for more than ten minutes, and 'arf of that was about the weather.

"I don't suppose anybody 'as suffered more from jealousy than wot I 'ave: Other people's jealousy, I mean. Ever since I was married the missis has been setting traps for me, and asking people to keep an eye on me. I blacked one of the eyes once—like a fool—and the chap it belonged to made up a tale about me that I ain't lived down yet.

"Years ago, when I was out with the missis one evening, I saved a gal's life for her. She slipped as she was getting off a bus, and I caught 'er just in time. Fine strapping gal she was, and afore I could get my balance we 'ad danced round and round 'arfway acrost the road with our arms round each other's necks, and my missis watching us from the pavement. When we were safe, she said the gal 'adn't slipped at all; and, as soon as the gal 'ad got 'er breath, I'm blest if she didn't say so too.

"You can't argufy with jealous people, and you can't shame 'em. When I told my missis once that I should never dream of being jealous of her, instead of up and thanking me for it, she spoilt the best frying-pan we ever had. When the widder-woman next-door but two and me 'ad rheumatics at the same time, she went and asked the doctor whether it was catching.

"The worse trouble o' that kind I ever got into was all through trying to do somebody else a kindness. I went out o' my way to do it; I wasted the whole evening for the sake of other people, and got into such trouble over it that even now it gives me the cold shivers to think of.

"Cap'n Tarbell was the man I tried to do a good turn to; a man what used to be master of a ketch called the Lizzie and Annie, trading between 'ere and Shoremouth. 'Artful Jack' he used to be called, and if ever a man deserved the name, he did. A widder-man of about fifty, and as silly as a boy of fifteen. He 'ad been talking of getting married agin for over ten years, and, thinking it was only talk, I didn't give 'im any good advice. Then he told me one night that 'e was keeping company with a woman named Lamb, who lived at a place near Shoremouth. When I asked 'im what she looked like, he said that she had a good 'art, and, knowing wot that meant, I wasn't at all surprised when he told me some time arter that 'e had been a silly fool.

"'Talk sense,' he ses. 'It ain't good enough for that. Why, she worships the ground I tread on. She thinks there is nobody like me in the whole wide world.'