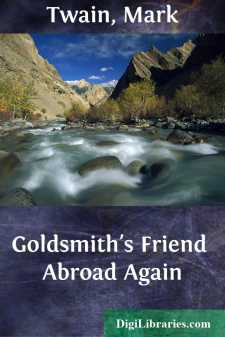 DEAR CHING-FOO: It is all settled, and I am to leave my oppressed and overburdened native land and cross the sea to that noble realm where all are free and all equal, and none reviled or abused—America! America, whose precious privilege it is to call herself the Land of the Free and the Home of the Brave. We and all that are about us here look over the waves longingly, contrasting the privations of this our birthplace with the opulent comfort of that happy refuge. We know how America has welcomed the Germans and the Frenchmen and the stricken and sorrowing Irish, and we know how she has given them bread and work, and liberty, and how grateful they are. And we know that America stands ready to welcome all other oppressed peoples and offer her abundance to all that come, without asking what their nationality is, or their creed or color. And, without being told it, we know that the foreign sufferers she has rescued from oppression and starvation are the most eager of her children to welcome us, because, having suffered themselves, they know what suffering is, and having been generously succored, they long to be generous to other unfortunates and thus show that magnanimity is not wasted upon them.

DEAR CHING-FOO: We are far away at sea now; on our way to the beautiful Land of the Free and Home of the Brave. We shall soon be where all men are alike, and where sorrow is not known.

The good American who hired me to go to his country is to pay me $12 a month, which is immense wages, you know—twenty times as much as one gets in China. My passage in the ship is a very large sum—indeed, it is a fortune—and this I must pay myself eventually, but I am allowed ample time to make it good to my employer in, he advancing it now. For a mere form, I have turned over my wife, my boy, and my two daughters to my employer's partner for security for the payment of the ship fare. But my employer says they are in no danger of being sold, for he knows I will be faithful to him, and that is the main security.

I thought I would have twelve dollars to, begin life with in America, but the American Consul took two of them for making a certificate that I was shipped on the steamer. He has no right to do more than charge the ship two dollars for one certificate for the ship, with the number of her Chinese passengers set down in it; but he chooses to force a certificate upon each and every Chinaman and put the two dollars in his pocket. As 1,300 of my countrymen are in this vessel, the Consul received $2,600 for certificates. My employer tells me that the Government at Washington know of this fraud, and are so bitterly opposed to the existence of such a wrong that they tried hard to have the extor—the fee, I mean, legalised by the last Congress;—[Pacific and Mediterranean steamship bills.(Ed. Mem.)]—but as the bill did not pass, the Consul will have to take the fee dishonestly until next Congress makes it legitimate....