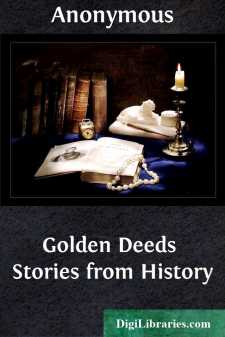 How Horatius Kept the Bridge

More than two thousand years ago Rome was ruled over by some kings called the Tarquins. As they were wicked men, the Roman people rose up against them, and drove them out of the city. The banished kings then went to Tuscany, where Lars Porsena took up their cause, and gathering an army together, went to help them force an entrance into Rome again.

HORATIUS AT THE BRIDGE

The city could only be entered by crossing the river Tiber, and there was but one wooden bridge over which the army could pass. Then the leader of the Romans, who was called the Consul, cried out to his followers to destroy the bridge.

"But," he added sadly, "I fear they will be upon us before we have time to hew it down."

At this a Roman called Horatius came forward and offered to stand at the farther end of the bridge, to keep the Tuscans at bay while it was being destroyed.

"The pathway is so narrow," said he, "that if two others will help me, we can stop the whole army from advancing. So who will keep the bridge with me?"

Two other brave Romans, called Spurius Lartius and Titus Herminius, at once answered the call of their comrade, and these three gallant men went to defend the passage, while the rest hastened to destroy the bridge.

When the Tuscans saw the three men standing ready to meet the whole army, they laughed aloud in scorn. But their laughter was soon changed to wrath and despair, as one after the other they and their chiefs were quickly laid low at the feet of the dauntless Romans.

Meanwhile the supports of the bridge were destroyed. The Consul shouted to the three heroes to hasten across before the ruin fell into the water beneath. Lartius and Herminius just succeeded in getting safely to the farther bank, but Horatius remained facing the foe until the last beam fell. Then with a cry he leapt into the foaming stream, and although badly wounded and heavy with his armour, he managed to rejoin his comrades on dry land, to the joy of the whole city. During his gallant fight, a dart from an enemy's arrow had put out one eye, and because of this he was given the surname of Cocles, which means one-eyed.

When the Emperor Albert ruled over Germany, he wished to govern the people of Switzerland in such a way that their independent spirit would be broken. To bring about this end he appointed a governor, who treated the Swiss unjustly and cruelly.

The name of this man was Gessler, and in order to test the people's obedience, he placed his hat upon a pole in the market square of one of the principal towns, and commanded that all who passed it should bow down before it in token of respect. A certain brave Swiss, named William Tell, having refused to obey such an absurd order, was at once arrested and taken before Gessler. The tyrant, who knew him to be a clever archer, said that his life would be spared only on the condition that he should with an arrow hit an apple placed upon the head of his only son. Tell's eye was true, so he consented to the horrible proposal.

An apple having been placed upon the head of his little son, he took his bow and quiver, and prepared to take aim. A moment later the apple, split in two halves, fell to the ground.

Gessler, who was enraged at Tell's success, noticed that he carried another arrow under his cloak.

"What have you a second arrow for?" he demanded.

"If I had killed my boy," replied the bold Swiss, "the second arrow was for you."

The angry governor had him thrown into prison, but Tell escaped, and revenged himself by killing the tyrant.