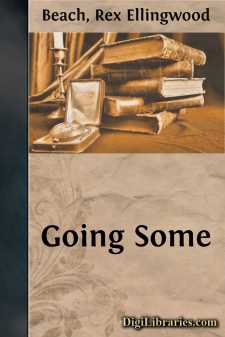 Four cowboys inclined their bodies over the barbed-wire fence which marked the dividing-line between the Centipede Ranch and their own, staring mournfully into a summer night such as only the far southwestern country knows. Big yellow stars hung thick and low-so low that it seemed they might almost be plucked by an upstretched hand-and a silent air blew across thousands of open miles of land lying crisp and fragrant under the velvet dark.

And as the four inclined their bodies, they inclined also their ears, after the strained manner of listeners who feel anguish at what they hear. A voice, shrill and human, pierced the night like a needle, then, with a wail of a tortured soul, died away amid discordant raspings: the voice of a phonograph. It was their own, or had been until one overconfident day, when the Flying Heart Ranch had risked it as a wager in a foot-race with the neighboring Centipede, and their own man had been too slow. As it had been their pride, it remained their disgrace. Dearly had they loved, and dearly lost it. It meant something that looked like honor, and though there were ten thousand thousand phonographs, in all the world there was not one that could take its place.

The sound ceased, there was an approving distant murmur of men's voices, and then the song began:

"Jerusalem, Jerusalem,  Lift up your voice and sing—"

Higher and higher the voice mounted until it reached again its first thin, ear-splitting pitch.

"Still Bill" Stover stirred uneasily in the darkness. "Why 'n 'ell don't they keep her wound up?" he complained. "Gallagher's got the soul of a wart-hog. It's criminal the way he massacres that hymn."

From a rod farther down the wire fence Willie answered him, in a boy's falsetto:

"I wonder if he does it to spite me?"

The other came out of the gloom, a little stoop-shouldered man with spectacles.

"I ain't noways sure," he piped, peering up at his lanky foreman. "Why do you reckon he allus lets Mrs. Melby peter out on my favorite record? He done the same thing last night. It looks like an insult."

"It's nothing but ignorance," Stover replied. "He don't want no trouble with you. None of 'em do."

"I'd like to know for certain." The small man seemed torn by doubt. "If I only knew he done it a-purpose, I'd git him. I bet I could do it from here."

Stover's voice was gruff as he commanded: "Forget it! Ain't it bad enough for us fellers to hang around like this every night without advertising our idiocy by a gun-play?"

"They ain't got no right to that phonograph," Willie averred, darkly.

"Oh yes, they have; they won it fair and square."

"Fair and square! Do you mean to say Humpy Joe run that foot-race on the square?"

"I never said nothin' like that whatever. I mean we bet it, and we lost it. Listen! There goes Carara's piece!"

Out past the corral floated the announcement in a man's metallic syllables:

"The Baggage Coach Ahead, as sung by Helena Mora for the Echo Phonograph, of New York and Pa-a-aris!"

From the dusk to the right of the two listeners now issued softSpanish phrases....