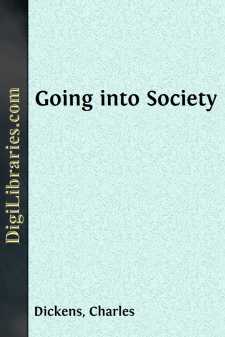 At one period of its reverses, the House fell into the occupation of a Showman.  He was found registered as its occupier, on the parish books of the time when he rented the House, and there was therefore no need of any clue to his name.  But, he himself was less easy to be found; for, he had led a wandering life, and settled people had lost sight of him, and people who plumed themselves on being respectable were shy of admitting that they had ever known anything of him.  At last, among the marsh lands near the river’s level, that lie about Deptford and the neighbouring market-gardens, a Grizzled Personage in velveteen, with a face so cut up by varieties of weather that he looked as if he had been tattooed, was found smoking a pipe at the door of a wooden house on wheels.  The wooden house was laid up in ordinary for the winter, near the mouth of a muddy creek; and everything near it, the foggy river, the misty marshes, and the steaming market-gardens, smoked in company with the grizzled man.  In the midst of this smoking party, the funnel-chimney of the wooden house on wheels was not remiss, but took its pipe with the rest in a companionable manner.

On being asked if it were he who had once rented the House to Let, Grizzled Velveteen looked surprised, and said yes.  Then his name was Magsman?  That was it, Toby Magsman—which lawfully christened Robert; but called in the line, from a infant, Toby.  There was nothing agin Toby Magsman, he believed?  If there was suspicion of such—mention it!

There was no suspicion of such, he might rest assured.  But, some inquiries were making about that House, and would he object to say why he left it?

Not at all; why should he?  He left it, along of a Dwarf.

Along of a Dwarf?

Mr. Magsman repeated, deliberately and emphatically, Along of a Dwarf.

Might it be compatible with Mr. Magsman’s inclination and convenience to enter, as a favour, into a few particulars?

It was a long time ago, to begin with;—afore lotteries and a deal more was done away with.  Mr. Magsman was looking about for a good pitch, and he see that house, and he says to himself, “I’ll have you, if you’re to be had.  If money’ll get you, I’ll have you.”