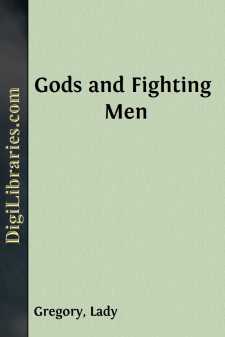 CHAPTER I. THE FIGHT WITH THE FIRBOLGS

It was in a mist the Tuatha de Danaan, the people of the gods of Dana, or as some called them, the Men of Dea, came through the air and the high air to Ireland.

It was from the north they came; and in the place they came from they had four cities, where they fought their battle for learning: great Falias, and shining Gorias, and Finias, and rich Murias that lay to the south. And in those cities they had four wise men to teach their young men skill and knowledge and perfect wisdom: Senias in Murias; and Arias, the fair-haired poet, in Finias; and Urias of the noble nature in Gorias; and Morias in Falias itself. And they brought from those four cities their four treasures: a Stone of Virtue from Falias, that was called the Lia Fail, the Stone of Destiny; and from Gorias they brought a Sword; and from Finias a Spear of Victory; and from Murias the fourth treasure, the Cauldron that no company ever went away from unsatisfied.

It was Nuada was king of the Tuatha de Danaan at that time, but Manannan, son of Lir, was greater again. And of the others that were chief among them were Ogma, brother to the king, that taught them writing, and Diancecht, that understood healing, and Neit, a god of battle, and Credenus the Craftsman, and Goibniu the Smith. And the greatest among their women were Badb, a battle goddess; and Macha, whose mast-feeding was the heads of men killed in battle; and the Morrigu, the Crow of Battle; and Eire and Fodla and Banba, daughters of the Dagda, that all three gave their names to Ireland afterwards; and Eadon, the nurse of poets; and Brigit, that was a woman of poetry, and poets worshipped her, for her sway was very great and very noble. And she was a woman of healing along with that, and a woman of smith's work, and it was she first made the whistle for calling one to another through the night. And the one side of her face was ugly, but the other side was very comely. And the meaning of her name was Breo-saighit, a fiery arrow. And among the other women there were many shadow-forms and great queens; but Dana, that was called the Mother of the Gods, was beyond them all.

And the three things they put above all others were the plough and the sun and the hazel-tree, so that it was said in the time to come that Ireland was divided between those three, Coll the hazel, and Cecht the plough, and Grian the sun.

And they had a well below the sea where the nine hazels of wisdom were growing; that is, the hazels of inspiration and of the knowledge of poetry. And their leaves and their blossoms would break out in the same hour, and would fall on the well in a shower that raised a purple wave. And then the five salmon that were waiting there would eat the nuts, and their colour would come out in the red spots of their skin, and any person that would eat one of those salmon would know all wisdom and all poetry. And there were seven streams of wisdom that sprang from that well and turned back to it again; and the people of many arts have all drank from that well....