God the Known and God the Unknown 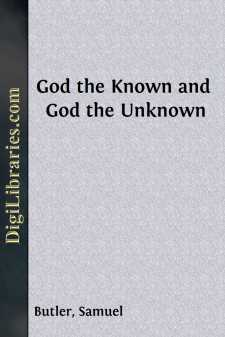 MANKIND has ever been ready to discuss matters in the inverse ratio of their importance, so that the more closely a question is felt to touch the hearts of all of us, the more incumbent it is considered upon prudent people to profess that it does not exist, to frown it down, to tell it to hold its tongue, to maintain that it has long been finally settled, so that there is now no question concerning it.

So far, indeed, has this been carried through all time past that the actions which are most important to us, such as our passage through the embryonic stages, the circulation of our blood, our respiration, etc. etc., have long been formulated beyond all power of reopening question concerning them—the mere fact or manner of their being done at all being ranked among the great discoveries of recent ages. Yet the analogy of past settlements would lead us to suppose that so much unanimity was not arrived at all at once, but rather that it must have been preceded by much smouldering [sic] discontent, which again was followed by open warfare; and that even after a settlement had been ostensibly arrived at, there was still much secret want of conviction on the part of many for several generations.

There are many who see nothing in this tendency of our nature but occasion for sarcasm; those, on the other hand, who hold that the world is by this time old enough to be the best judge concerning the management of its own affairs will scrutinise [sic] this management with some closeness before they venture to satirise [sic] it; nor will they do so for long without finding justification for its apparent recklessness; for we must all fear responsibility upon matters about which we feel we know but little; on the other hand we must all continually act, and for the most part promptly. We do so, therefore, with greater security when we can persuade both ourselves and others that a matter is already pigeon-holed than if we feel that we must use our own judgment for the collection, interpretation, and arrangement of the papers which deal with it. Moreover, our action is thus made to appear as if it received collective sanction; and by so appearing it receives it. Almost any settlement, again, is felt to be better than none, and the more nearly a matter comes home to everyone, the more important is it that it should be treated as a sleeping dog, and be let to lie, for if one person begins to open his mouth, fatal developments may arise in the Babel that will follow.

It is not difficult, indeed, to show that, instead of having reason to complain of the desire for the postponement of important questions, as though the world were composed mainly of knaves or fools, such fixity as animal and vegetable forms possess is due to this very instinct. For if there had been no reluctance, if there were no friction and vis inertae to be encountered even after a theoretical equilibrium had been upset, we should have had no fixed organs nor settled proclivities, but should have been daily and hourly undergoing Protean transformations, and have still been throwing out pseudopodia like the amoeba....