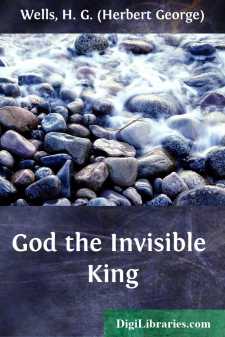 Perhaps all religions, unless the flaming onset of Mohammedanism be an exception, have dawned imperceptibly upon the world. A little while ago and the thing was not; and then suddenly it has been found in existence, and already in a state of diffusion. People have begun to hear of the new belief first here and then there. It is interesting, for example, to trace how Christianity drifted into the consciousness of the Roman world. But when a religion has been interrogated it has always had hitherto a tale of beginnings, the name and story of a founder. The renascent religion that is now taking shape, it seems, had no founder; it points to no origins. It is the Truth, its believers declare; it has always been here; it has always been visible to those who had eyes to see. It is perhaps plainer than it was and to more peopleвЂ”that is all.

It is as if it still did not realise its own difference. Many of those who hold it still think of it as if it were a kind of Christianity. Some, catching at a phrase of Huxley's, speak of it as Christianity without Theology. They do not know the creed they are carrying. It has, as a matter of fact, a very fine and subtle theology, flatly opposed to any belief that could, except by great stretching of charity and the imagination, be called Christianity. One might find, perhaps, a parallelism with the system ascribed to some Gnostics, but that is far more probably an accidental rather than a sympathetic coincidence. Of that the reader shall presently have an opportunity of judging.

This indefiniteness of statement and relationship is probably only the opening phase of the new faith. Christianity also began with an extreme neglect of definition. It was not at first anything more than a sect of Judaism. It was only after three centuries, amidst the uproar and emotions of the council of Nicaea, when the more enthusiastic Trinitarians stuffed their fingers in their ears in affected horror at the arguments of old Arius, that the cardinal mystery of the Trinity was established as the essential fact of Christianity. Throughout those three centuries, the centuries of its greatest achievements and noblest martyrdoms, Christianity had not defined its God. And even to-day it has to be noted that a large majority of those who possess and repeat the Christian creeds have come into the practice so insensibly from unthinking childhood, that only in the slightest way do they realise the nature of the statements to which they subscribe. They will speak and think of both Christ and God in ways flatly incompatible with the doctrine of the Triune deity upon which, theoretically, the entire fabric of all the churches rests. They will show themselves as frankly Arians as though that damnable heresy had not been washed out of the world forever after centuries of persecution in torrents of blood. But whatever the present state of Christendom in these matters may be, there can be no doubt of the enormous pains taken in the past to give Christian beliefs the exactest, least ambiguous statement possible....