God and Mr. Wells A Critical Examination of 'God the Invisible King' 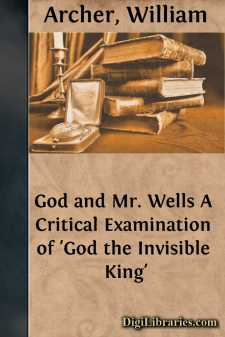 When it was known that Mr. H. G. Wells had set forth to discover God, all amateurs of intellectual adventure were filled with pleasurable excitement and anticipation. For is not Mr. Wells the great Adventurer of latter-day literature? No quest is too perilous for him, no forlorn-hope too daring. He led the first explorers to the moon. He it was who lured the Martians to earth and exterminated them with microbes. He has ensnared an angel from the skies and expiscated a mermaid from the deep. He has mounted a Time Machine (of his own invention) and gone careering down the vistas of the Future. But these were comparatively commonplace feats. After all, there had been a Jules Verne, there had been a Gulliver and a Peter Wilkins, there had been a More, a Morris and a Bellamy. It might be that he was fitted for far greater things. "There remains," we said to ourselves, "the blue ribbon of intellectual adventure, the unachieved North Pole of spiritual exploration. He has had countless predecessors in the enterprise, some of whom have loudly claimed success; but their log-books have been full of mere hallucinations and nursery tales. What if it should be reserved for Mr. Wells to bring back the first authentic news from a source more baffling than that of Nile or Amazon—the source of the majestic stream of Being? What if it should be given him to sign his name to the first truly-projected chart of the scheme of things?"

We almost held our breath in eager anticipation, just as we did when there came from America a well-authenticated rumor that the problem of flying had at last been solved. Were we on the brink of another and much more momentous discovery? Was Mr. Wells to be the Peary of the great quest? Or only the last of a thousand Dr. Cooks?

II A GOD WHO "GROWED"

Our excitement, our suspense, were so much wasted emotion. Mr. Wells's enterprise was not at all what we had figured it to be.

is a very interesting, and even stimulating disquisition, full of a fine social enthusiasm, and marked, in many passages, by deep poetic feeling. But it is not a work of investigation into the springs of Being. Mr. Wells explicitly renounces from the outset any dealings with "cosmogony." It is a description of a way of thinking, a system of nomenclature, which Mr. Wells declares to be extremely prevalent in "the modern mind," from which he himself extracts much comfort and fortification, and which he believes to be destined to regenerate the world.

But Mr. Wells will not have it that what is involved is a mere system of nomenclature. He avers that he, in common with many other like-minded persons, has achieved, not so much an intellectual discovery as an emotional realisation, of something actual and objective which he calls God. He does not, so far as I remember, use the term "objective"; but as he insists that God is "a spirit, a person, a strongly marked and knowable personality" (p. 5), "a single spirit and a single person" (p. 18), "a great brother and leader of our little beings" (p....