Glengarry School Days: a story of early days in Glengarry 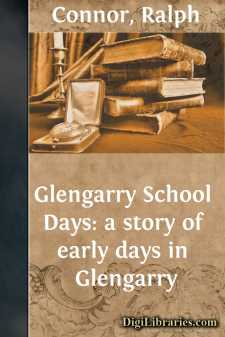 The "Twentieth" school was built of logs hewn on two sides. The cracks were chinked and filled with plaster, which had a curious habit of falling out during the summer months, no one knew how; but somehow the holes always appeared on the boys' side, and being there, were found to be most useful, for as looking out of the window was forbidden, through these holes the boys could catch glimpses of the outer world—glimpses worth catching, too, for all around stood the great forest, the playground of boys and girls during noon-hour and recesses; an enchanted land, peopled, not by fairies, elves, and other shadowy beings of fancy, but with living things, squirrels, and chipmunks, and weasels, chattering ground-hogs, thumping rabbits, and stealthy foxes, not to speak of a host of flying things, from the little gray-bird that twittered its happy nonsense all day, to the big-eyed owl that hooted solemnly when the moon came out. A wonderful place this forest, for children to live in, to know, and to love, and in after days to long for.

It was Friday afternoon, and the long, hot July day was drawing to a weary close. Mischief was in the air, and the master, Archibald Munro, or "Archie Murro," as the boys called him, was holding himself in with a very firm hand, the lines about his mouth showing that he was fighting back the pain which had never quite left him from the day he had twisted his knee out of joint five years ago, in a wrestling match, and which, in his weary moments, gnawed into his vitals. He hated to lose his grip of himself, for then he knew he should have to grow stern and terrifying, and rule these young imps in the forms in front of him by what he called afterwards, in his moments of self-loathing, "sheer brute force," and that he always counted a defeat.

Munro was a born commander. His pale, intellectual face, with its square chin and firm mouth, its noble forehead and deep-set gray eyes, carried a look of such strength and indomitable courage that no boy, however big, ever thought of anything but obedience when the word of command came. He was the only master who had ever been able to control, without at least one appeal to the trustees, the stormy tempers of the young giants that used to come to school in the winter months.

The school never forgot the day when big Bob Fraser "answered back" in class. For, before the words were well out of his lips, the master, with a single stride, was in front of him, and laying two swift, stinging cuts from the rawhide over big Bob's back, commanded, "Hold out your hand!" in a voice so terrible, and with eyes of such blazing light, that before Bob was aware, he shot out his hand and stood waiting the blow. The school never, in all its history, received such a thrill as the next few moments brought; for while Bob stood waiting, the master's words fell clear-cut upon the dead silence, "No, Robert, you are too big to thrash. You are a man. No man should strike you—and I apologize." And then big Bob forgot his wonted sheepishness and spoke out with a man's voice, "I am sorry I spoke back, sir." And then all the girls began to cry and wipe their eyes with their aprons, while the master and Bob shook hands silently....