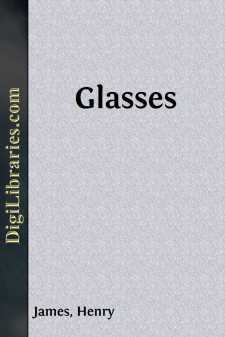 Yes indeed, I say to myself, pen in hand, I can keep hold of the thread and let it lead me back to the first impression.  The little story is all there, I can touch it from point to point; for the thread, as I call it, is a row of coloured beads on a string.  None of the beads are missing—at least I think they’re not: that’s exactly what I shall amuse myself with finding out.

I had been all summer working hard in town and then had gone down to Folkestone for a blow.  Art was long, I felt, and my holiday short; my mother was settled at Folkestone, and I paid her a visit when I could.  I remember how on this occasion, after weeks in my stuffy studio with my nose on my palette, I sniffed up the clean salt air and cooled my eyes with the purple sea.  The place was full of lodgings, and the lodgings were at that season full of people, people who had nothing to do but to stare at one another on the great flat down.  There were thousands of little chairs and almost as many little Jews; and there was music in an open rotunda, over which the little Jews wagged their big noses.  We all strolled to and fro and took pennyworths of rest; the long, level cliff-top, edged in places with its iron rail, might have been the deck of a huge crowded ship.  There were old folks in Bath chairs, and there was one dear chair, creeping to its last full stop, by the side of which I always walked.  There was in fine weather the coast of France to look at, and there were the usual things to say about it; there was also in every state of the atmosphere our friend Mrs. Meldrum, a subject of remark not less inveterate.  The widow of an officer in the Engineers, she had settled, like many members of the martial miscellany, well within sight of the hereditary enemy, who however had left her leisure to form in spite of the difference of their years a close alliance with my mother.  She was the heartiest, the keenest, the ugliest of women, the least apologetic, the least morbid in her misfortune.  She carried it high aloft with loud sounds and free gestures, made it flutter in the breeze as if it had been the flag of her country.  It consisted mainly of a big red face, indescribably out of drawing, from which she glared at you through gold-rimmed aids to vision, optic circles of such diameter and so frequently displaced that some one had vividly spoken of her as flattering her nose against the glass of her spectacles.  She was extraordinarily near-sighted, and whatever they did to other objects they magnified immensely the kind eyes behind them.  Blest conveniences they were, in their hideous, honest strength—they showed the good lady everything in the world but her own queerness.  This element was enhanced by wild braveries of dress, reckless charges of colour and stubborn resistances of cut, wondrous encounters in which the art of the toilet seemed to lay down its life.  She had the tread of a grenadier and the voice of an angel.

In the course of a walk with her the day after my arrival I found myself grabbing her arm with sudden and undue familiarity.  I had been struck by the beauty of a face that approached us and I was still more affected when I saw the face, at the sight of my companion, open like a window thrown wide.  A smile fluttered out of it an brightly as a drapery dropped from a sill—a drapery shaken there in the sun by a young lady flanked by two young men, a wonderful young lady who, as we drew nearer, rushed up to Mrs....