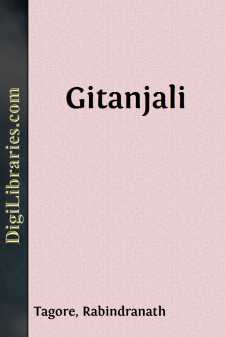 A few days ago I said to a distinguished Bengali doctor of medicine, 'I know no German, yet if a translation of a German poet had moved me, I would go to the British Museum and find books in English that would tell me something of his life, and of the history of his thought. But though these prose translations from Rabindranath Tagore have stirred my blood as nothing has for years, I shall not know anything of his life, and of the movements of thought that have made them possible, if some Indian traveller will not tell me.' It seemed to him natural that I should be moved, for he said, 'I read Rabindranath every day, to read one line of his is to forget all the troubles of the world.' I said, 'An Englishman living in London in the reign of Richard the Second had he been shown translations from Petrarch or from Dante, would have found no books to answer his questions, but would have questioned some Florentine banker or Lombard merchant as I question you. For all I know, so abundant and simple is this poetry, the new renaissance has been born in your country and I shall never know of it except by hearsay.' He answered, 'We have other poets, but none that are his equal; we call this the epoch of Rabindranath. No poet seems to me as famous in Europe as he is among us. He is as great in music as in poetry, and his songs are sung from the west of India into Burma wherever Bengali is spoken. He was already famous at nineteen when he wrote his first novel; and plays when he was but little older, are still played in Calcutta. I so much admire the completeness of his life; when he was very young he wrote much of natural objects, he would sit all day in his garden; from his twenty-fifth year or so to his thirty-fifth perhaps, when he had a great sorrow, he wrote the most beautiful love poetry in our language'; and then he said with deep emotion, 'words can never express what I owed at seventeen to his love poetry. After that his art grew deeper, it became religious and philosophical; all the inspiration of mankind are in his hymns. He is the first among our saints who has not refused to live, but has spoken out of Life itself, and that is why we give him our love.' I may have changed his well-chosen words in my memory but not his thought. 'A little while ago he was to read divine service in one of our churches—we of the Brahma Samaj use your word 'church' in English—it was the largest in Calcutta and not only was it crowded, but the streets were all but impassable because of the people.'

Other Indians came to see me and their reverence for this man sounded strange in our world, where we hide great and little things under the same veil of obvious comedy and half-serious depreciation. When we were making the cathedrals had we a like reverence for our great men? 'Every morning at three—I know, for I have seen it'—one said to me, 'he sits immovable in contemplation, and for two hours does not awake from his reverie upon the nature of God. His father, the Maha Rishi, would sometimes sit there all through the next day; once, upon a river, he fell into contemplation because of the beauty of the landscape, and the rowers waited for eight hours before they could continue their journey.' He then told me of Mr....