Ginseng and Other Medicinal Plants A Book of Valuable Information for Growers as Well as Collectors of Medicinal Roots, Barks, Leaves, Etc. 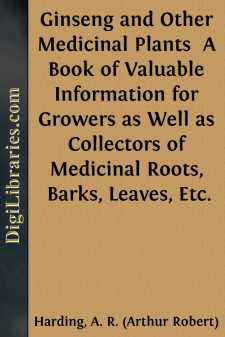 CHAPTER I.PLANTS AS A SOURCE OF REVENUE.

With the single exception of ginseng, the hundred of plants whose roots are used for medical purposes, America is the main market and user. Ginseng is used mainly by the Chinese. The thickly inhabited Chinese Empire is where the American ginseng is principally used. To what uses it is put may be briefly stated, as a superstitious beverage. The roots with certain shapes are carried about the person for charms. The roots resembling the human form being the most valuable.

The most valuable drugs which grow in America are ginseng and golden seal, but there are hundreds of others as well whose leaves, barks, seeds, flowers, etc., have a market value and which could be cultivated or gathered with profit. In this connection an article which appeared in the Hunter-Trader-Trapper, Columbus, Ohio, under the title which heads this chapter is given in full:

To many unacquainted with the nature of the various wild plants which surround them in farm and out-o'-door life, it will be a revelation to learn that the world's supply of crude, botanical (vegetable) drugs are to a large extent gotten from this class of material. There are more than one thousand different kinds in use which are indigenous or naturalized in the United States. Some of these are very valuable and have, since their medicinal properties were discovered, come into use in all parts of the world; others now collected in this country have been brought here and, much like the English sparrow, become in their propagation a nuisance and pest wherever found.

The impression prevails among many that the work of collecting the proper kind, curing and preparing for the market is an occupation to be undertaken only by those having experience and a wide knowledge of their species, uses, etc. It is a fact, though, that everyone, however little he may know of the medicinal value of such things, may easily become familiar enough with this business to successfully collect and prepare for the market many different kinds from the start.

There are very large firms throughout the country whose sole business is for this line of merchandise, and who are at all times anxious to make contracts with parties in the country who will give the work business-like attention, such as would attend the production of other farm articles, and which is so necessary to the success of the work.

If one could visit the buyers of such firms and ask how reliable they have found their sources of supply for the various kinds required, it would provoke much laughter. It is quite true that not more than one in one hundred who write these firms to get an order for some one or more kinds they might supply, ever give it sufficient attention to enable a first shipment to be made. Repeated experiences of this kind have made the average buyer very promptly commit to the nearest waste basket all letters received from those who have not been doing this work in the past, recognizing the utter waste of time in corresponding with those who so far have shown no interest in the work....