Gideon's Band A Tale of the Mississippi 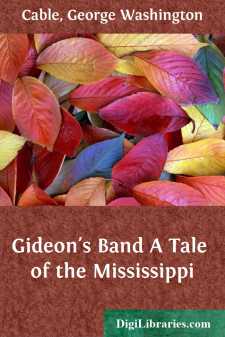 Saturday, April, 1852. There was a fervor in the sky as of an August noon, although the clocks of the city would presently strike five.

Dazzling white clouds, about to show the earliest flush of the sun's decline, beamed down upon a turbid river harbor, where the water was deep so close inshore that the port's unbroken mile of steamboat wharf nowhere stretched out into the boiling flood. Instead it merely lined the shore, the steamers packing in bow on with their noses to it, their sterns out in the stream, their fenders chafing each other's lower guards.

New Orleans was very proud of this scene. Very prompt were her citizens, such as had travelled, to remind you that in many seaports vast warehouses and roofed docks of enormous cost thronged out so greedily to meet incoming craft that the one boat which you might be seeking you would find quite hidden among walls and roofs, and of all the rest of the harbor's general fleet you could see little or nothing. Not so on this great sun-swept, wind-swept, rain-swept, unswept steamboat levee. You might come up out of any street along that mile-wide front, and if there were a hundred river steamers in port a hundred you would behold with one sweep of the eye. Overhead was only the blue dome, in full view almost from rim to rim; and all about, amid a din of shouting, whip-cracking, scolding, and laughing, and a multitudinous flutter of many-colored foot-square flags, each marking its special lot of goods, were swarms of men—white, yellow, and black—trucking, tumbling, rolling, hand-barrowing, and "toting" on heads and shoulders a countless worth of freight in bags, barrels, casks, bales, boxes, and baskets. Hundreds of mules and drays came and went with this same wealth, and out beyond all, between wharf and open river, profiled on the eastern sky, letting themselves be unloaded and reloaded, stood the compacted, motionless, elephantine phalanx of the boats.

The flood beneath them was up to the wharf's flooring, yet their low, light-draught hulls, with the freight decks that covered them doubled in carrying room by their widely overhanging freight guards, were hid by the wilderness of goods on shore. Hid also were their furnaces, boilers, and engines on the same deck, sharing it with the cargo. But all their gay upper works, so toplofty and frail, showed a gleaming white front to the western sun. You marked each one's jack-staff, that rose mast high from the unseen prow, and behind it the boiler deck, high over the boilers. Over the boiler deck was the hurricane roof, above that the officers' rooms, called the "texas." Above the texas was the pilot-house, and on either side, well forward of the pilot-house and towering abreast of each other and above all else—higher than the two soaring derrick posts at the two forward corners of the passenger and hurricane decks, higher even than the jack-staff's peak—stood the two great black chimneys.

And what a populace teemed round and through all! Here was the Creole, there the New Englander....