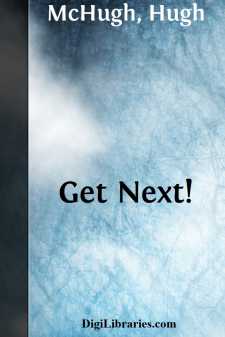 GET NEXT! JOHN HENRY ON RACE TIPSTERS

One day last week I was beating the ballast up Broadway when Pete, the Piker, declared himself in and began to chatter about cinches at the track.

"Get the saw, Pete, and cut it," I said; "it's many a long day since I've been a Patsy for the ponies. Once they stung me so hard that for months my bank account looked like a porous plaster, so I took the chloroform treatment and now you and your tips to the discards, my boy, to the discards!"

Pete isn't really a native of Dopeville-on-the-Fence, but he likes to have people think he knows the racing game backwards.

And he does—backwards. In real life he's a theatrical manager and his name on the three-sheets is Peter J. Badtime, the Human Salary Spoiler.

In theatrical circles they call him the impresario with the sawdust koko and the split-second appetite.

Every time Pete poses as an angel for a troupe if you listen hard you can hear the fuse blow out somewhere between Albany and Schenectady.

From time to time over 2,197 actors have had to walk home on account of Pete's cold feet.

Pete can develop a severe case of frosted pave pounders quicker than any angel that ever had to dig for the oatmeal money.

Pete is an Ace all right—the Ace of Chumps!

His long suit when he isn't dishing out his autobiography is to stand around a race track and bark at the bookmakers.

Pete is what I would call a plunger with the lid on.

He never bets more than two dollars on a race and even then he keeps wishing he had it back.

Pete had me nailed to the corner of Broadway and 42d Street for about ten minutes when fortunately Bunch Jefferson rolled up in his new kerosene cart and I needed no second invitation to hop aboard and give Pete the happy day-day!

"Whither away, Bunch?" I asked, as the Bubble began to do a Togo through the fattest streets in the town.

"I thought I'd run up and get the girls and take 'em for a spin out to the Belmont Park races," Bunch came back.

"Did you telephone them?" I inquired.

"No, but I told Alice this morning that if I got through at the office in time I'd take her to the track. We can call for Peaches on the way across town," was Bunch's program.

"Whisper, Bunch!" I suggested; "let's do the selfish gag for once and leave the wives at home. I haven't bet a nickle on a skate for two years, but my little black man has the steering wheel to-day and I'm going to fall off the sense wagon and break a five dollar bill."

"I'm with you, John," chuckled Bunch, and half an hour later we were on our way | to the track, after having sent notes to our wives that important business kept us chained to the post of duty, but if they would meet us at the Hotel Astor at 7 p.m. we'd all dine together.

Bunch had just tied his Bubble to a tree at the track and was in the act of giving it a long cool drink of gasolene and some cracked oats, when Flash Harvey bore down on us and made a touch for the turn-out.