Germany, The Next Republic? 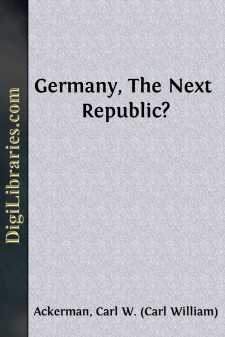 CHAPTER I MOBILIZATION OF PUBLIC OPINION I

The Haupttelegraphenamt (the Chief Telegraph Office) in Berlin is the centre of the entire telegraph system of Germany. It is a large, brick building in the Franzoesischestrasse guarded, day and night, by soldiers. The sidewalks outside the building are barricaded. Without a pass no one can enter. Foreign correspondents in Berlin, when they had telegrams to send to their newspapers, frequently took them from the Foreign Office to the Chief Telegraph Office personally in order to speed them on their way to the outside world. The censored despatches were sealed in a Foreign Office envelope. With this credential correspondents were permitted to enter the building and the room where all telegrams are passed by the military authorities.

During my two years' stay in Berlin I went to the telegraph office several times every week. Often I had to wait while the military censor read my despatches. On a large bulletin board in this room, I saw, and often read, documents posted for the information of the telegraph officials. During one of my first waiting periods I read an original document relating to the events at the beginning of the war. This was a typewritten letter signed by the Director of the Post and Telegraph. Because I was always watched by a soldier escort, I could never copy it. But after reading it scores of times I soon memorised everything, including the periods.

This document was as follows:

To the Chief Telegraph Office:

From to-day on, the Post and Telegraph communications between Germany on the one hand and:

on the other hand are interrupted because Germany finds herself in a state of war.

This notice, which was never published, shows that the man who directed the Post and Telegraph Service of the Imperial Government knew on the 2nd of August, 1914, who Germany's enemies would be. Of the eleven enemies of Germany to-day only Roumania and the United States were not included. If the Director of the Post and Telegraph knew what to expect, it is certain that the Imperial Government knew. This announcement shows that Germany expected war with nine different nations, but at the time it was posted on the bulletin board of the Haupttelegraphenamt, neither Italy, Japan, Belgium nor Portugal had declared war. Italy did not declare war until nearly a year and a half afterwards, Portugal nearly two years afterward and Japan not until December, 1914.

This document throws an interesting light upon the preparations Germany made for a world war.

The White, Yellow, Grey and Blue Books, which all of the belligerents published after the beginning of the war, dealt only with the attempts of these nations to prevent the war. None of the nations has as yet published white books to show how it prepared for war, and still, every nation in Europe had been expecting and preparing for a European conflagration....