Georgina of the Rainbows 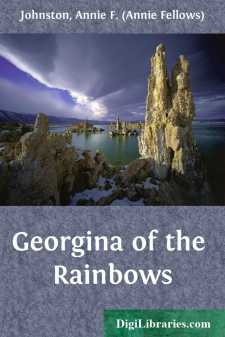 If old Jeremy Clapp had not sneezed his teeth into the fire that winter day this story might have had a more seemly beginning; but, being a true record, it must start with that sneeze, because it was the first happening in Georgina Huntingdon's life which she could remember distinctly.

She was in her high-chair by a window overlooking a gray sea, and with a bib under her chin, was being fed dripping spoonfuls of bread and milk from the silver porringer which rested on the sill. The bowl was almost on a level with her little blue shoes which she kept kicking up and down on the step of her high-chair, wherefore the restraining hand which seized her ankles at intervals. It was Mrs. Triplett's firm hand which clutched her, and Mrs. Triplett's firm hand which fed her, so there was not the usual dilly-dallying over Georgina's breakfast as when her mother held the spoon. She always made a game of it, chanting nursery rhymes in a gay, silver-bell-cockle-shell sort of way, as if she were one of the "pretty maids all in a row," just stepped out of a picture book.

Mrs. Triplett was an elderly widow, a distant relative of the family, who lived with them. "Tippy" the child called her before she could speak plainly—a foolish name for such a severe and dignified person, but Mrs. Triplett rather seemed to like it. Being the working housekeeper, companion and everything else which occasion required, she had no time to make a game of Georgina's breakfast, even if she had known how. Not once did she stop to say, "Curly-locks, Curly-locks, wilt thou be mine?" or to press her face suddenly against Georgina's dimpled rose-leaf cheek as if it were somthing too temptingly dear and sweet to be resisted. She merely said, "Here!" each time she thrust the spoon towards her.

Mrs. Triplett was in an especial hurry this morning, and did not even look up when old Jeremy came into the room to put more wood on the fire. In winter, when there was no garden work, Jeremy did everything about the house which required a man's hand. Although he must have been nearly eighty years old, he came in, tall and unbending, with a big log across his shoulder. He walked stiffly, but his back was as straight as the long poker with which he mended the fire.

Georgina had seen him coming and going about the place every day since she had been brought to live in this old gray house beside the sea, but this was the first time he had made any lasting impression upon her memory. Henceforth, she was to carry with her as long as she should live the picture of a hale, red-faced old man with a woolen muffler wound around his lean throat. His knitted "wrist-warmers" slipped down over his mottled, deeply-veined bands when he stooped to roll the log into the fire. He let go with a grunt. The next instant a mighty sneeze seized him, and Georgina, who had been gazing in fascination at the shower of sparks he was making, saw all of his teeth go flying into the fire. If his eyes had suddenly dropped from their sockets upon the hearth, or his ears floated off from the sides of his head, she could not have been more terrified, for she had not yet learned that one's teeth may be a separate part of one's anatomy....