George Sand, some aspects of her life and writings 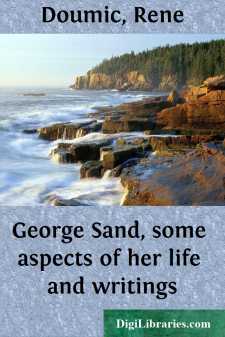 I AURORE DUPIN PSYCHOLOGY OF A DAUGHTER OF ROUSSEAU

In the whole of French literary history, there is, perhaps, no subject of such inexhaustible and modern interest as that of George Sand. Of what use is literary history? It is not only a kind of museum, in which a few masterpieces are preserved for the pleasure of beholders. It is this certainly, but it is still more than this. Fine books are, before anything else, living works. They not only have lived, but they continue to live. They live within us, underneath those ideas which form our conscience and those sentiments which inspire our actions. There is nothing of greater importance for any society than to make an inventory of the ideas and the sentiments which are composing its moral atmosphere every instant that it exists. For every individual this work is the very condition of his dignity. The question is, should we have these ideas and these sentiments, if, in the times before us, there had not been some exceptional individuals who seized them, as it were, in the air and made them viable and durable? These exceptional individuals were capable of thinking more vigorously, of feeling more deeply, and of expressing themselves more forcibly than we are. They bequeathed these ideas and sentiments to us. Literary history is, then, above and beyond all things, the perpetual examination of the conscience of humanity.

There is no need for me to repeat what every one knows, the fact that our epoch is extremely complex, agitated and disturbed. In the midst of this labyrinth in which we are feeling our way with such difficulty, who does not look back regretfully to the days when life was more simple, when it was possible to walk towards a goal, mysterious and unknown though it might be, by straight paths and royal routes?

George Sand wrote for nearly half a century. For fifty times three hundred and sixty-five days, she never let a day pass by without covering more pages than other writers in a month. Her first books shocked people, her early opinions were greeted with storms. From that time forth she rushed head-long into everything new, she welcomed every chimera and passed it on to us with more force and passion in it. Vibrating with every breath, electrified by every storm, she looked up at every cloud behind which she fancied she saw a star shining. The work of another novelist has been called a repertory of human documents. But what a repertory of ideas her work was! She has said what she had to say on nearly every subject; on love, the family, social institutions and on the various forms of government. And with all this she was a woman. Her case is almost unique in the history of letters. It is intensely interesting to study the influence of this woman of genius on the evolution of modern thought.

I shall endeavour to approach my subject conscientiously and with all due respect. I shall study biography where it is indispensable for the complete understanding of works. I shall give a sketch of the original individuals I meet on my path, portraying these only at their point of contact with the life of our authoress, and it seems to me that a gallery in which we see Sandeau, Sainte-Beuve, Musset, Michel (of Bourges), Liszt, Chopin, Lamennais, Pierre Leroux, Dumas fils, Flaubert and many, many others is an incomparable portrait gallery....