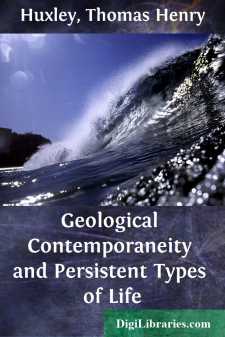 MERCHANTS occasionally go through a wholesome, though troublesome and not always satisfactory, process which they term "taking stock." After all the excitement of speculation, the pleasure of gain, and the pain of loss, the trader makes up his mind to face facts and to learn the exact quantity and quality of his solid and reliable possessions.

The man of science does well sometimes to imitate this procedure; and, forgetting for the time the importance of his own small winnings, to re-examine the common stock in trade, so that he may make sure how far the stock of bullion in the cellar—on the faith of whose existence so much paper has been circulating—is really the solid gold of truth.

The Anniversary Meeting of the Geological Society seems to be an occasion well suited for an undertaking of this kind—for an inquiry, in fact, into the nature and value of the present results of paleontological investigation; and the more so, as all those who have paid close attention to the late multitudinous discussions in which paleontology is implicated, must have felt the urgent necessity of some such scrutiny.

First in order, as the most definite and unquestionable of all the results of paleontology, must be mentioned the immense extension and impulse given to botany, zoology, and comparative anatomy, by the investigation of fossil remains. Indeed, the mass of biological facts has been so greatly increased, and the range of biological speculation has been so vastly widened, by the researches of the geologist and paleontologist, that it is to be feared there are naturalists in existence who look upon geology as Brindley regarded rivers. "Rivers," said the great engineer, "were made to feed canals"; and geology, some seem to think, was solely created to advance comparative anatomy.

Were such a thought justifiable, it could hardly expect to be received with favour by this assembly. But it is not justifiable. Your favourite science has her own great aims independent of all others; and if, notwithstanding her steady devotion to her own progress, she can scatter such rich alms among her sisters, it should be remembered that her charity is of the sort that does not impoverish, but "blesseth him that gives and him that takes."

Regard the matter as we will, however, the facts remain. Nearly 40,000 species of animals and plants have been added to the Systema Naturae by paleontologic research. This is a living population equivalent to that of a new continent in mere number; equivalent to that of a new hemisphere, if we take into account the small population of insects as yet found fossil, and the large proportion and peculiar organization of many of the Vertebrata.

But, beyond this, it is perhaps not too much to say that, except for the necessity of interpreting paleontologic facts, the laws of distribution would have received less careful study; while few comparative anatomists (and those not of the first order) would have been induced by mere love of detail, as such, to study the minutiae of osteology, were it not that in such minutiae lie the only keys to the most interesting riddles offered by the extinct animal world.

These assuredly are great and solid gains. Surely it is matter for no small congratulation that in half a century (for paleontology, though it dawned earlier, came into full day only with Cuvier) a subordinate branch of biology should have doubled the value and the interest of the whole group of sciences to which it belongs....