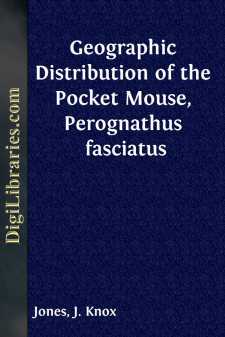 In studying the kinds of pocket mice known from Nebraska, I examined thirteen specimens of P. fasciatus from the northwestern part of the state which did not agree satisfactorily with the descriptions of any known subspecies of fasciatus. This impelled me to examine material from the entire range of P. fasciatus. This examination revealed that: (1) Perognathus callistus Osgood, heretofore considered to be a full species, should be reduced to subspecific rank under P. fasciatus; and (2) specimens from eastern Wyoming and adjacent parts of Montana, South Dakota and Nebraska represent an heretofore unrecognized subspecies. Further investigation, however, revealed that Perognathus flavescens olivaceogriseus Swenk, described from northwestern Nebraska (Swenk, 1940:6), is not flavescens but actually fasciatus. Since the specimens on which Swenk's description was based were taken within the range of this newly recognized subspecies, and since my examination of the holotype shows it to be of the species Perognathus fasciatus, the subspecific name olivaceogriseus is available.

The subspecies of P. fasciatus are most easily distinguished by color of pelage, in which there is a general cline from northeast (dark) to southwest (pale). Cranially, the subspecies are less distinct. The skulls of P. f. callistus can be distinguished from those of the other subspecies by several differences; however, among the other four subspecies, only minor cranial differences are evident. Individual variation was found to be greater than secondary sexual variation.

Capitalized color terms are those of Ridgway, Color Standards and Color Nomenclature, Washington, D. C., 1912. Assistance with field work to obtain specimens for the University of Kansas Museum of Natural History is acknowledged from the Kansas University Endowment Association and the National Science Foundation....