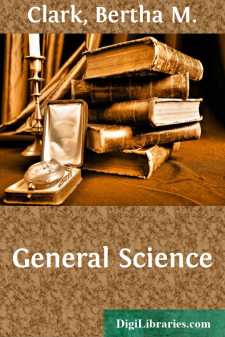 I. Value of Fire. Every day, uncontrolled fire wipes out human lives and destroys vast amounts of property; every day, fire, controlled and regulated in stove and furnace, cooks our food and warms our houses. Fire melts ore and allows of the forging of iron, as in the blacksmith's shop, and of the fashioning of innumerable objects serviceable to man. Heated boilers change water into the steam which drives our engines on land and sea. Heat causes rain and wind, fog and cloud; heat enables vegetation to grow and thus indirectly provides our food. Whether heat comes directly from the sun or from artificial sources such as coal, wood, oil, or electricity, it is vitally connected with our daily life, and for this reason the facts and theories relative to it are among the most important that can be studied. Heat, if properly regulated and controlled, would never be injurious to man; hence in the following paragraphs heat will be considered merely in its helpful capacity.

FIG. 1.--As the water becomes warmer it expands and rise in the narrow tube.

2. General Effect of Heat. Expansion and Contraction. One of the best-known effects of heat is the change which it causes in the size of a substance. Every housewife knows that if a kettle is filled with cold water to begin with, there will be an overflow as soon as the water becomes heated. Heat causes not only water, but all other liquids, to occupy more space, or to expand, and in some cases the expansion, or increase in size, is surprisingly large. For example, if 100 pints of ice water is heated in a kettle, the 100 pints will steadily expand until, at the boiling point, it will occupy as much space as 104 pints of ice water.

FIG. 2.—When the ball is heated, it become too large to slip through the ring.

The expansion of water can be easily shown by heating a flask (Fig. I) filled with water and closed by a cork through which a narrow tube passes. As the water is heated, it expands and forces its way up the narrow tube. If the heat is removed, the liquid cools, contracts, and slowly falls in the tube, resuming in time its original size or volume. A similar observation can be made with alcohol, mercury, or any other convenient liquid.

Not only liquids are affected by heat and cold, but solids also are subject to similar changes. A metal ball which when cool will just slip through a ring (Fig. 2) will, when heated, be too large to slip through the ring. Telegraph and telephone wires which in winter are stretched taut from pole to pole, sag in hot weather and are much too long. In summer they are exposed to the fierce rays of the sun, become strongly heated, and expand sufficiently to sag. If the wires were stretched taut in the summer, there would not be sufficient leeway for the contraction which accompanies cold weather, and in winter they would snap.

FIG. 3—As the air in A is heated, it expands and escapes in the form of bubbles.

Air expands greatly when heated (Fig. 3), but since air is practically invisible, we are not ordinarily conscious of any change in it. The expansion of air can be readily shown by putting a drop of ink in a thin glass tube, inserting the tube in the cork of a flask, and applying heat to the flask (Fig. 4). The ink is forced up the tube by the expanding air. Even the warmth of the hand is generally sufficient to cause the drop to rise steadily in the tube. The rise of the drop of ink shows that the air in the flask occupies more space than formerly, and since the quantity of air has not changed, each cubic inch of space must hold less warm air than| it held of cold air; that is, one cubic inch of warm air weighs less than one cubic inch of cold air, or warm air is less dense than cold air. All gases, if not confined, expand when heated and contract as they cool. Heat, in general, causes substances to expand or become less dense.

3. Amount of Expansion and Contraction. While most substances expand when heated and contract when cooled, they are not all affected equally by the same changes in temperature. Alcohol expands more than water, and water more than mercury. Steel wire which measures 1/4 mile on a snowy day will gain 25 inches in length on a warm summer day, and an aluminum wire under the same conditions would gain 50 inches in length.

4. Advantages and Disadvantages of Expansion and Contraction. We owe the snug fit of metal tires and bands to the expansion and contraction resulting from heating and cooling....