Gascoyne, The Sandal-Wood Trader A Tale of the Pacific 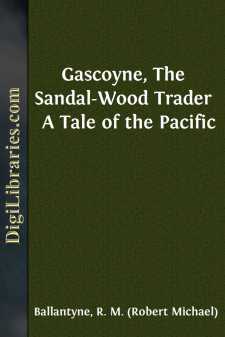 The great Pacific is the scene of our story. On a beautiful morning, many years ago, a little schooner might have been seen floating, light and graceful as a seamew, on the breast of the slumbering ocean. She was one of those low, black-hulled vessels, with raking, taper masts, trimly-cut sails, and elegant form, which we are accustomed to associate with the idea of a yacht or a pirate.

She might have been the former, as far as appearance went; for the sails and deck were white as snow, and every portion of brass and copper above her water-line shone in the hot sun with dazzling brilliancy. But pleasure-seekers were not wont, in those days, to take such distant flights, or to venture into such dangerous seas,—dangerous alike from the savage character of the islanders, and the numerous coral reefs that lie hidden a few feet below the surface of the waves.

Still less probable did it seem that the vessel in question could belong to the lawless class of craft to which we have referred; for, although she had what may be styled a wicked aspect, and was evidently adapted for swift sailing, neither large guns nor small arms of any kind were visible.

Whatever her nature or her object, she was reduced, at the time we introduce her to the reader, to a state of inaction by the dead calm which prevailed. The sea resembled a sheet of clear glass. Not a cloud broke the softness of the sky, in which the sun glowed hotter and hotter as it rose towards the zenith. The sails of the schooner hung idly from the yards; her reflected image was distorted, but scarcely broken, by the long, gentle swell; her crew, with the exception of the watch, were asleep either on deck or down below; and so deep was the universal silence, that, as the vessel rose and fell with a slow, quiet motion, the pattering of the reef-points on her sails forcibly attracted the listener's attention, as does the ticking of a clock in the deep silence of night. A few sea-birds rested on the water, as if in the enjoyment of the profound peace that reigned around; and far away on the horizon might be seen the tops of the palm trees that grow on one of those coral islands which lie scattered in thousands, like beautiful gems, on the surface of that bright blue sea.

Among the men who lay sleeping in various easy, off-hand attitudes on the schooner's deck, was one who merits special attention—not only because of the grotesque appearance of his person, but also because he is one of the principal actors in our tale.

He was a large, powerful man, of that rugged build and hairy aspect that might have suggested the idea that he would be difficult to kill. He was a fair man, with red hair, and a deeply sun-burned face, on which jovial good humor sat almost perpetually enthroned. At the moment when we introduce him to the reader, however, that expression happened to be modified in consequence of his having laid him down to sleep in a sprawling manner on his back—the place as well as the position being, apparently, one of studied discomfort....