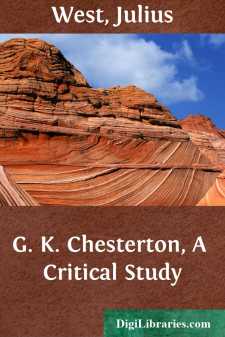 INTRODUCTORY The habit, to which we are so much addicted, of writing books about other people who have written books, will probably be a source of intense discomfort to its practitioners in the twenty-first century. Like the rest of their kind, they will pin their ambition to the possibility of indulging in epigram at the expense of their contemporaries. In order to lead up to the achievement of this desire they will have to work in the nineteenth century and the twentieth. Between the two they will find an obstacle of some terror. The eighteen nineties will lie in their path, blocking the way like an unhealthy moat, which some myopes might almost mistake for an aquarium. All manner of queer fish may be discerned in these unclear waters.

To drop the metaphor, our historians will find themselves confronted by a startling change. The great Victorians write no longer, but are succeeded by eccentrics. There is Kipling, undoubtedly the most gifted of them all, but not everybody's darling for all that. There is that prolific trio of best-sellers, Mrs. Humphry Ward, Miss Marie Corelli, and Mr. Hall Caine. There is Oscar Wilde, who has a vast reputation on the Continent, but never succeeded in convincing the British that he was much more than a compromise between a joke and a smell. There is the whole Yellow Book team, who never succeeded in convincing anybody. The economic basis of authorship had been shaken by the abolition of the three-volume novel. The intellectual basis had been lulled to sleep by that hotchpotch of convention and largeness that we call the Victorian Era. Literature began to be an effort to express the inexpressible, resulting in outraged grammar and many dots. . . .

English literature at the end of the last century stood in sore need of some of the elementary virtues. If obviousness and simplicity are liable to be overdone, they are not so deadly in their after-effects as the bizarre and the extravagant. The literary movement of the eighteen nineties was like a strong stimulant given to a patient dying of old age. Its results were energetic, but the energy was convulsive. We should laugh if we saw a man apparently dancing in mid-air—until we noticed the rope about his neck. It is impossible to account for the success of the Yellow Book school and its congeners save on the assumption that the rope was, generally speaking, invisible.

In this Year of Grace, 1915, we are still too close to the eighteen nineties, still too liable to be influenced by their ways, to be able to speak for posterity and to pronounce the final judgment upon those evil years. It is possible that the critics of the twenty-first century, as they turn over the musty pages of the Yellow Book, will ejaculate with feeling: "Good God, what a dull time these people must have had!" On the whole it is probable that this will be their verdict. They will detect the dullness behind the mechanical brilliancy of Oscar Wilde, and recognize the strange hues of the whole Æsthetic Movement as the garments of men who could not, or would not see....