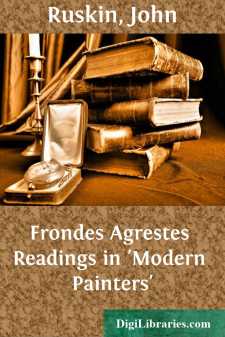 SECTION I. PRINCIPLES OF ART.

1. Perfect taste is the faculty of receiving the greatest possible pleasure from those material sources which are attractive to our moral nature in its purity and perfection; but why we receive pleasure from some forms and colours, and not from others, is no more to be asked or answered than why we like sugar and dislike wormwood.

2. The temper by which right taste is formed is characteristically patient. It dwells upon what is submitted to it. It does not trample upon it,—lest it should be pearls, even though it look like husks. It is good ground, penetrable, retentive; it does not send up thorns of unkind thoughts, to choke the weak seed; it is hungry and thirsty too, and drinks all the dew that falls on it. It is an honest and good heart, that shows no too ready springing before the sun be up, but fails not afterwards; it is distrustful of itself, so as to be ready to believe and to try all things; and yet so trustful of itself, that it will neither quit what it has tried, nor take anything without trying. And the pleasure which it has in things that it finds true and good, is so great, that it cannot possibly be led aside by any tricks of fashion, or diseases of vanity; it cannot be cramped in its conclusions by partialities and hypocrisies; its visions and its delights are too penetrating,—too living,—for any whitewashed object or shallow fountain long to endure or supply. It clasps all that it loves so hard that it crushes it if it be hollow.

3. It is the common consent of men that whatever branch of any pursuit ministers to the bodily comforts, and regards material uses, is ignoble, and whatever part is addressed to the mind only, is noble; and that geology does better in reclothing dry bones and revealing lost creations, than in tracing veins of lead and beds of iron; astronomy better in opening to us the houses of heaven, than in teaching navigation; botany better in displaying structure than in expressing juices; surgery better in investigating organization than in setting limbs.—Only it is ordained that, for our encouragement, every step we make in the more exalted range of science adds something also to its practical applicabilities; that all the great phenomena of nature, the knowledge of which is desired by the angels only, by us partly, as it reveals to farther vision the being and the glory of Him in whom they rejoice and we live, dispense yet such kind influences and so much of material blessing as to be joyfully felt by all inferior creatures, and to be desired by them with such single desire as the imperfection of their nature may admit; that the strong torrents, which, in their own gladness, fill the hills with hollow thunder, and the vales with winding light, have yet their bounden charge of field to feed, and barge to bear; that the fierce flames to which the Alp owes its upheaval and the volcano its terror, temper for us the metal vein, and warm the quickening spring; and that for our incitement, I say, not our reward,—for knowledge is its own reward,—herbs have their healing, stones their preciousness, and stars their times....