From the Ball-Room to Hell

by Thomas A. Faulkner 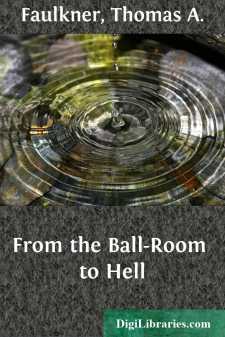 CHAPTER I. FIRST AND LAST STEP.

And letters innumerable have been coming in with questions to the same effect.

The more I mingle with people outside the dancing circle the more forcibly I am made to realize how many there are who are seeking to know the truth concerning the evil of dancing, and how many thousands more who, if they are not seeking that knowledge, certainly ought to have it.

Have you read the preface?

Let me assure you in the first place that I am well aware that there are many church members and professing Christians who dance; but, if on the strength of this you deem it a safe amusement, come with me for a few evenings, and when you have seen all that I can show you, let your judgment tell you, whether you can, with safety, place your pure, beautiful daughter in the dancing academy or ball-room.

Let us first take an instance from the "select" dancing academy, and thus begin at the root of the matter.

Here is a beautiful young girl. Let me take her for an example.

She is the daughter of wealthy parents; they have been called to mourn the loss of two of their children; and this is their only remaining treasure, their darling, their idol almost, whom they love more than their own lives.

They wish to bestow upon her every accomplishment which modern society demands, so when it is announced that Prof. —— will open his select dancing academy they hasten to place her under his instruction.

At first she seems shocked at the manner in which he embraces her to teach her the latest waltz.

It is her first experience in the arms of a strange man, with his limbs pressed to hers, and in her natural modesty she shrinks from so familiar a touch. It brings a bright flush of indignation to her cheek as she thinks what an unladylike and indecent position to assume with a man who, but a few hours before, was an utter stranger, but she says to herself: "This is the position every one must take who waltzes in the most approved style—church members and all—so of course it is no harm for me." She thus takes the first step in casting aside that delicate God-given instinct which should be the guide of every pure woman in such matters.

She is very bright and learns rapidly, but a few weeks have passed before she is able to waltz well, and is surrounded by the handsomest and most gallant men in the room, who flatter her until her head is quite turned. She has entirely overcome her delicacy about being embraced in public for half an hour by strange men. In fact she rather likes it now. She wonders all day, before dancing school, if that handsome man who dances so "elegantly" and says such nice things to her, will ask her to dance with him to-night, and finds herself dreaming of how delightful it would be to feel his arm about her.

The evening at last comes; the uninteresting square dances are gone through with, and the music of the waltz begins. Her partner is the Apollo of her day dreams. He presses her close to his breast, and they glide over the floor together as if the two were but one.

When she raises her eyes, timidly at first, to that handsome but deceitful face, now so close to her own, the look that is in his eyes as they meet hers, seems to burn into her very soul. A strange, sweet thrill shakes her very being and leaves her weak and powerless and obliged to depend for support upon the arm which is pressing her to himself in such a suggestive manner, but the sensation is a pleasant one and grows to be the very essence of her life....