From Sail to Steam, Recollections of Naval Life 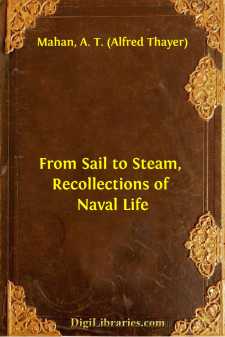 When I was a boy, some years before I obtained my appointment in the navy, I spent many of those happy hours that only childhood knows poring over the back numbers of a British service periodical, which began its career in 1828, with the title Colburn's United Service Magazine; under which name, save and except the Colburn, it still survives. Besides weightier matters, its early issues abounded in reminiscences by naval officers, then yet in the prime of life, who had served through the great Napoleonic wars. More delightful still, it had numerous nautical stories, based probably on facts, serials under such entrancing titles as "Leaves from my Log Book," by Flexible Grommet, Passed Midshipman; a pen-name, the nautical felicity of which will be best appreciated by one who has had the misfortune to handle a grommet which was not flexible. Then there was "The Order Book," by Jonathan Oldjunk; an epithet so suggestive of the waste-heap, even to a landsman's ears, that one marvels a man ever took it unto himself, especially in that decline of life when we are more sensitive on the subject of bodily disabilities than once we were. Old junk, however, can yet be "worked up," as the sea expression goes, into other uses, and that perhaps was what Mr. Oldjunk meant; his early adventures as a young "luff" were, for economical reasons, worked up into their present literary shape, with the addition of a certain amount of extraneous matter—love-making, and the like. Indeed, so far from uselessness, that veteran seaman and rigid economist, the Earl of St. Vincent, when First Lord of the Admiralty, had given to a specific form of old junk—viz., "shakings"—the honors of a special order, for the preservation thereof, the which forms the staple of a comical anecdote in Basil Hall's Fragments of Voyages and Travels; itself a superior example of the instructive "recollections," of less literary merit, which but for Colburn's would have perished.

Any one who has attempted to write history knows what queer nuggets of useful information lie hidden away in such papers; how they often help to reconstruct an incident, or determine a mooted point. If the Greeks, after the Peloponnesian war, had had a Colburn's, we should have a more certain, if not a perfect, clew to the reconstruction of the trireme; and probably even could deduce with some accuracy the daily routine, the several duties, and hear the professional jokes and squabbles, of their officers and crews. The serious people who write history can never fill the place of the gossips, who pour out an unpremeditated mixture of intimate knowledge and idle trash.

Trash? Upon the whole is not the trash the truest history? perhaps not the most valuable, but the most real? If you want contemporary color, contemporary atmosphere, you must seek it among the impressions which can be obtained only from those who have lived a life amid particular surroundings, which they breathe and which colors them—dyes them in the wool. However skilless, they cannot help reproducing, any more than water poured from an old ink-bottle can help coming out more or less black; although, if sufficiently pretentious, they can monstrously caricature, especially if they begin with the modest time-worn admission that they are more familiar with the marling-spike than with the pen. But even the caricature born of pretentiousness will not prevent the unpremeditated betrayal of conditions, facts, and incidents, which help reconstruct the milieu; how much more, then, the unaffected simplicity of the born story-teller. I do not know how Froissart ranks as an authority with historians. I have not read him for years; and my recollections are chiefly those of childhood, with all the remoteness and all the vividness which memory preserves from early impressions....