From Pole to Pole A Book for Young People 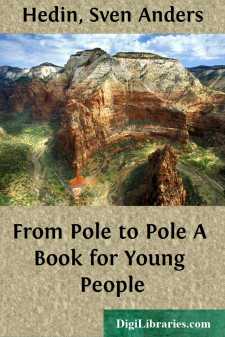 ACROSS EUROPE Stockholm to Berlin

Our journey begins at Stockholm, the capital of my native country. Leaving Stockholm by train in the evening, we travel all night in comfortable sleeping-cars and arrive next morning at the southernmost point of Sweden, the port of Trelleborg, where the sunlit waves sweep in from the Baltic Sea.

Here we might expect to have done with railway travelling, and we rather look for the guard to come and open the carriage doors and ask the passengers to alight. Surely it is not intended that the train shall go on right across the sea? Yet that is actually what happens. The same train and the same carriages, which bore us out of Stockholm yesterday evening, go calmly across the Baltic Sea, and we need not get out before we arrive at Berlin. The section of the train which is to go on to Germany is run by an engine on to a great ferry-boat moored to the quay by heavy clamps and hooks of iron. The rails on Swedish ground are closely connected with those on the ferry-boat, and when the carriages are pushed on board by the engine, they are fastened with chains and hooks so that they may remain quite steady even if the vessel begins to roll. As the traveller lies dozing in his compartment, he will certainly hear whistles and the rattle of iron gear and will notice that the compartment suddenly becomes quite dark. But only when the monotonous groaning and the constant vibration of the wheels has given place to a gentle and silent heaving will he know that he is out on the Baltic Sea.

We are by no means content, however, to lie down and doze. Scarcely have the carriages been anchored on the ferry-boat before we are on the upper deck with its fine promenade. The ferry-boat is a handsome vessel, 370 feet long, brand-new and painted white everywhere. It is almost like a first-class hotel. In the saloon the tables are laid, and Swedish and German passengers sit in groups at breakfast. There are separate rooms for coffee and smoking, for reading and writing; and we find a small bookstall where a boy sells guidebooks, novels, and the Swedish and German newspapers of the day.

The ferry-boat is now gliding out of the harbour, and every minute that passes carries us farther from our native land. Now the whole town of Trelleborg is displayed before our eyes, its warehouses and new buildings, its chimneys and the vessels in the harbour. The houses become smaller, the land narrows down to a strip on the horizon, and at last there is nothing to be seen but a dark cloud of smoke rising from the steamers and workshops. We steam along a fairway rich in memories, and over a sea which has witnessed many wonderful exploits and marvellous adventures. Among the wreckage and fragments at its bottom sleep vikings and other heroes who fought for their country; but to-day peace reigns over the Baltic, and Swedes, Danes, Russians, and Germans share in the harvest of the sea. Yet still, as of yore, the autumn storms roll the slate-grey breakers against the shores; and still on bright summer days the blue waves glisten, silvered by the sun....