From Chaucer to Tennyson 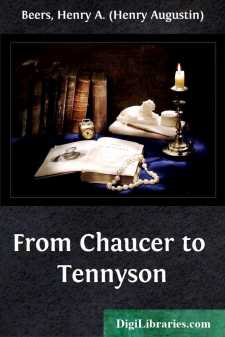 The conscious water saw its Lord and blushed.

Abraham Cowley is now less remembered for his poetry than for his pleasant volume of essays, published after the Restoration; but he was thought in his own time a better poet than Milton. His collection of love songs—the Mistress—is a mass of cold conceits, in the metaphysical manner; but his elegies on Crashaw and Harvey have much dignity and natural feeling. He introduced the Pindaric ode into English, and wrote an epic poem on a biblical subject—the Davideis—now quite unreadable. Cowley was a royalist, and followed the exiled court to France.

Side by side with the church poets were the cavaliers—Carew, Waller, Lovelace, Suckling, L'Estrange, and others—gallant courtiers and officers in the royal army, who mingled love and loyalty in their strains. Colonel Richard Lovelace, who lost every thing in the king's service, and was several times imprisoned, wrote two famous songs—To Lucasta on going to the Wars—in which occur the lines,

I could not love thee, dear, so much,Loved I not honor more—

and to Althæa from Prison, in which he sings "the sweetness, mercy, majesty, and glories" of his king, and declares that "stone-walls do not a prison make, nor iron bars a cage." Another of the cavaliers was Sir John Suckling, who formed a plot to rescue the Earl of Strafford, raised a troop of horse for Charles I., was impeached by the Parliament and fled to France. He was a man of wit and pleasure, who penned a number of gay trifles, but has been saved from oblivion chiefly by his exquisite Ballad upon a Wedding. Thomas Carew and Edmund Waller were poets of the same stamp—graceful and easy, but shallow in feeling. Carew, however, showed a nicer sense of form than most of the fantastic school. Some of his love songs are written with delicate art. There are noble lines in his elegy on Donne and in one passage of his masque Coelum Britannicum. In his poem entitled The Rapture great splendor of language and imagery is devoted to the service of an unbridled sensuality. Waller, who followed the court to Paris, was the author of two songs, which are still favorites, Go, Lovely Rose, and On a Girdle, and he first introduced the smooth, correct manner of writing in couplets, which Dryden and Pope carried to perfection. Gallantly rather than love was the inspiration of these courtly singers. In such verses as Carew's Encouragements to a Lover, and George Wither's The Manly Heart,

If she be not so to me,What care I how fair she be?—

we see the revolt against the high, passionate, Sidneian love of the Elizabethan sonneteers, and the note of persiflage that was to mark the lyrical verse of the Restoration. But the poetry of the cavaliers reached its high-water mark in one fiery-hearted song by the noble and unfortunate James Graham, Marquis of Montrose, who invaded Scotland in the interest of Charles II., and was taken prisoner and put to death at Edinburgh in 1650.

My dear and only love, I prayThat little world of theeBe governed by no other swayThan purest monarchy....