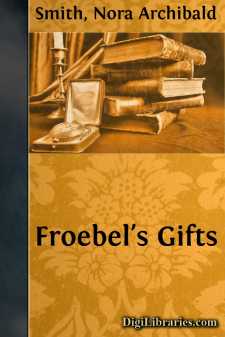 The three little volumes on that Republic of Childhood, the kindergarten, of which this handbook, dealing with the gifts, forms the initial number, might well be called Chips from a Kindergarten Workshop. They are the outcome of talks and conferences on Froebel's educational principles with successive groups of earnest young women here, there, and everywhere, for fifteen years, and represent as much practical work at the bench as a carpenter could show in a similar length of time. They are the result of mutual give and take, of question and answer, of effort and experience, of the friction of minds against one another, of ideas struck out in the heat of argument, and of varied experience with many hundred little children of all nationalities and conditions. They are not theories, written in the seclusion of the study; and if perchance they have the defects, so should they have the virtues, too, of work corrected and revised at every step by the "child in the midst." If it is objected that many things in them have been heard before, we can but say with Montaigne: "Truth and reason are common to every one, and are no more his who spake them first than his who spake them after."

The various talks have been cut down here, enlarged there, condensed in one place, amplified in another, from year to year, as knowledge and experience have grown; many of the ideas which they advocated in the beginning have been eliminated, as being completely reversed by the passage of time, and much new matter has been added as the kindergarten principle has developed. They are as much a growth as a coral reef, though the authors have little hope that they will be as enduring.

The kindergarten of 1895 is not the kindergarten of 1880, for the science of education has made great strides in these past fifteen years. Many things which were held to be vital principles when we began our talks with kindergarten students, we now find were but lifeless methods after all. It is not that time has reversed the fundamental principles on which the kindergarten rests,—these are as true as truth and as changeless; but the interpretation of them has greatly changed and broadened with the passage of years, and many of the instrumentalities of education which Froebel devised are destined to further transformation in the future. For this reason, the last book on the kindergarten is sometimes the best book, since it naturally embodies the latest thought and discovery on the subject.

These talks on the kindergarten have purposely been divested of a certain amount of technicality and detail, in the hope that they will thus reach not only kindergarten students, but the many mothers and teachers who really long to know what Froebel's system of education is and what it aims to do. They will never of themselves make a kindergartner, and are not intended to do so; but they certainly should shed some light on Froebel's theories, and establish a basis on which they can be worked out in the home and in the school....