Friends in Feathers and Fur, and Other Neighbors For Young Folks 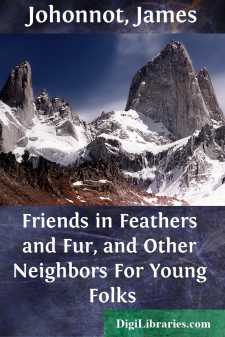 1. Here we find the hen and chickens, a new company of our farm-yard friends. We see that they are very unlike the other friends we have been studying, and, though we know them well, we may find out something new about them.

2. Instead of a coat of hair or fur, the hen is covered with feathers, all pointing backward and lying over each other, so that the rain falls off as from the shingles of a house.

3. When we studied the cat, we found that she had four legs for walking and running, and that she used the paws on her front legs for scratching and catching her prey.

4. We have but two legs for walking or running, our fore legs being arms, and our paws, hands.

5. These new friends, the chickens, have but two legs, and in this way are more like boys and girls than are cats and dogs.

6. But the chicken has the same number of limbs as the others, only those in front are wings instead of fore legs or arms.

7. Here is a picture of the legs and feet of a hen. We see that the legs are covered with scales, and that each foot has four toes, three pointing forward and one back. Each toe has a long, sharp, and strong nail.

8. Let us look at the hen when she is walking slowly! As she lifts up each foot, her toes curl up, very much as our fingers do when we double them up to make a fist.

9. When the chicken is about a year old, a spur, hard like horn, begins to grow on the inside of each leg. Upon the old cocks these spurs are long and sharp, and he can strike savage blows with them.

10. It is when we look a hen in the face that we see how much it differs from all the animals we have studied before.

11. The head stands up straight, and the eyes are placed on each side, so that it can look forward, to the side, and partly backward.

12. Two little ears are just back and below the eyes; at first we would hardly know what they are, they are so small and unlike the other ears which we have seen.

13. All the lower part of the face is a bill, hard like horn, and running out to a point. The bill opens and makes the mouth, and two holes in the upper part make the nose.

14. As the whole bill is hard like bone, the hen does not need teeth, and does not have any. She was never known to complain with the tooth-ache.

15. Large bits of food she scratches apart with her feet, or breaks up with her bill; but, as she can not chew, the pieces she takes into her mouth she swallows whole.

16. Upon the top of the head is a red, fleshy comb, which is much larger on cocks than on hens. This comb is sometimes single, and sometimes double.

17. Under the bill on each side there hangs down a wattle of red flesh that looks very much like the comb.

18. The tail of the cock has long feathers, which curl over the rest and give him a very graceful appearance.

LESSON II. WHAT FOWLS DO.

1. When the hen walks, she folds her wings close by her side; but when she flies, she spreads them out like a fan. Her body is so heavy that she can fly but a little ways without resting....