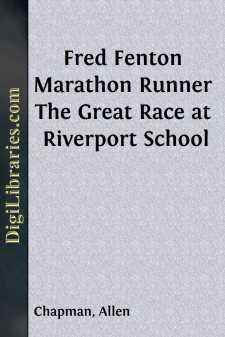 CHAPTER I IN THE SNOW

"Now then, let's see who can put a shot through that round hole in the tree-trunk up there. Take a try, Sid."

"Must be twenty yards away from here, if a foot, eh, Bristles?"

"More like twenty-five to me, Colon; and looks farther than from first base to third, on the diamond."

"Line up, everybody, and we'll soon find out who takes the cake at making a center shot. But hadn't we better bar out Fred Fenton?"

"Why, because he's the regular pitcher on the Riverside High School nine: he's used to putting 'em over the plate for a steady diet."

"That's a fact, and Fred, you'll have to consider yourself handicapped in this little contest of skill."

"Anyhow, wait till we've had our fling, Fred; and then if nobody seems to get a bull's-eye, you might show us how to do the job."

"All right, boys, that suits me. And while you bombard that poor old tree, I'll be amusing myself making one good firm snowball, against the time my turn comes."

"Go at it, fellows! There, did you see me smack one just a foot below the hole? Gee! that was a sure-enough dandy hit of yours, Bristles; closer by six inches than mine. Everybody put your best licks in!"

The hard balls flew thick and furiously, for it happened that the rather heavy fall of snow was just moist enough to be easily pressed into the finest of missiles for boyish use.

Many of these swiftly thrown balls missed the tree-trunk entirely. Others splattered here and there against the bark, leaving a tell-tale white mark. A few came dangerously near the yawning opening; but not a single one thus far had managed to disappear within the gap.

The boy who had been called Fred Fenton, having manipulated a single snowball in his hands, stood there watching the onslaught, and occasionally speaking words of encouragement to those who were taking part in the spirited contest.

"That was a corker, Sid Wells, and it would have done the business if you'd only put an ounce more of speed in your throw, so as to have raised it three inches. Good boy, Brad, you left a mark just alongside the hole, so some of it must have spattered in the hollow! Not quite so fierce, Bristles; that one would have landed, if you'd been a little less powerful in your throw!"

Presently some of the boys began to grow weary of the sport.

"What's the use of our trying to hit that mark so far away?" grumbled Bristles; which expression of defeat was something strange to hear from his lips, because the owner of the shock of heavy hair that stood upright, and had gained him such a peculiar nick-name, was as a rule very stubborn, and ready to stick to the very end.

"Let Fred show us how!" suggested Sid Wells, who was known as the particular chum of the pitcher, he being the son of a retired professor, now engaged in wonderful experiments which might some day astonish the world.

The rest of the boys seemed ready to join in the chorus, and make way for the ball flinger. They had watched this same Fred send his dazzling shots over the plate with such wonderful speed and accuracy that he held the strike-out record for the high school league....