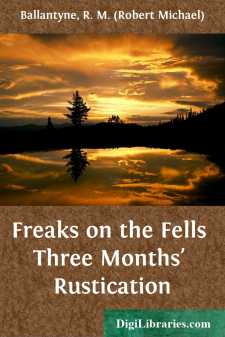 Mr Sudberry in his Counting-House.

Mr John Sudberry was a successful London merchant. He was also a fat little man. Moreover, he was a sturdy little man, wore spectacles, and had a smooth bald head, over which, at the time we introduce him to the reader, fifty summers had passed, with their corresponding autumns, winters, and springs. The passage of so many seasons over him appeared to have exercised a polishing influence on the merchant, for Mr Sudberry’s cranium shone like a billiard-ball. In temperament Mr Sudberry was sanguine, and full of energy. He could scarcely have been a successful merchant without these qualities. He was also extremely violent.

Now, it is necessary here to guard the reader from falling into a mistake in reference to Mr Sudberry’s character. We have said that he was violent, but it must not be supposed that he was passionate. By no means. He was the most amiable and sweet-tempered of men. His violence was owing to physical rather than mental causes. He was hasty in his volitions, impulsive in his actions, madly reckless in his personal movements. His moral and physical being was capable of only two conditions—deep repose or wild activity.

At his desk Mr Sudberry was wont to sit motionless like a statue, with his face buried in his hands and his thoughts busy. When these thoughts culminated, he would start as if he had received an electric shock, seize a pen, and, with pursed lips and frowning brows, send it careering over the paper with harrowing rapidity, squeaking and chirping, (the pen, not the man), like a small bird with a bad cold. Mr Sudberry used quills. He was a tremendous writer. He could have reported the debates of the “House” in long-hand.

The merchant’s portrait is not yet finished. He was a peculiar man, and men of this sort cannot be sketched off in a few lines. Indeed, had he not been a peculiar man, it would not have been worth while to drag him thus prominently into notice.

Among other peculiarities in Mr Sudberry’s character, he was afflicted with a chronic tendency to dab his pen into the ink-bottle and split it to the feather, or double up its point so as to render it unserviceable. This infirmity, coupled with an uncommon capacity for upsetting ink-bottles, had induced him to hire a small clerk, whose principal duties were to mend pens, wipe up ink, and, generally, to attend to the removal of débris.

When Mr Sudberry slept he did it profoundly. When he awoke he did it with a start and a stare, as if amazed at having caught himself in the very act of indulging in such weakness. When he washed he puffed, and gasped, and rubbed, and made such a noise, that one might have supposed a walrus was engaged in its ablutions. How the skin of his head, face, and neck stood the towelling it received is incomprehensible! When he walked he went like an express train; when he sauntered he relapsed into the slowest possible snail’s-pace, but he did not graduate the changes from one to the other. When he sat down he did so with a crash....