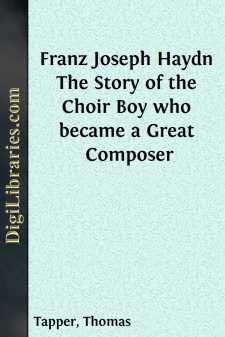 The Story of the Choir Boy who Became a Great Composer

Joseph Haydn was born in Rohrau, a little Austrian village not far from Hainburg.

It is quite worth while for you to look for this town and for the River Leytha in any large geography. You may not find Rohrau itself, for it is a very small town, but you will surely find the River Leytha which flows by it.

The parents lived in a very modest little house. The picture of this house is worth studying, and remembering. As you see, it is of one story with a thatched roof. The farm buildings are joined to the house itself. The windows look inviting and pretty. They seem to tell us very plainly that it is warm and cosy within.

It will be easy for you to remember the year in which Joseph Haydn was born, because you have already learned in school that our President, George Washington, whose picture should be inserted here, was born in the same year—1732.

This President's birthday was in what month? What day of the month?

Joseph Haydn was born on March 31st of the same year (he used to say that he was born "in the night" between March 31st and April 1st).

Washington's father died in the year when he and Joseph Haydn were ten years old. This is a picture of Washington, as a man, bidding his mother good-bye before leaving for a war.

Little Joseph Haydn's father and mother were poor, but they loved cleanliness and system.

They feared God, worked hard, and loved music. Joseph's father used to sing in a clear tenor voice, accompanying himself on the harp. At home little Joseph was called Sepperl.

When the child was old enough, he, too, began to sing. He quite surprised everyone by his sweet voice.

In the neighboring town of Hainburg there lived a schoolmaster named Frankh, who used to visit the Haydns and play the violin. Sepperl used to watch him very closely, and one day he, too, began to play the violin while his father and mother were singing. But he had no real violin, of course, so he had to play on a make-believe one of two sticks. But he sang in tune and kept time with his wooden bow.

One day the schoolmaster chanced to come up the street while the little boy was playing his make-believe music. Watching him closely, he saw that he was really fond of music.

Then Cousin Frankh, as they called him, had a long talk with Sepperl's father and mother. After a while it was agreed that the little boy should go to Hainburg (the place you found on the map), and there become a pupil of the schoolmaster.

They worked hard at the school in those days. Once, when Haydn was an old man, he said: "I shall be grateful to that man (the schoolmaster) as long as I live, for keeping me so hard at work. But I used to get more floggings than food."

When he was six years old, Sepperl could "stand up like a man" and sing masses in the church choir, besides playing a little on the piano and the violin.

It once happened that a drummer was needed in a procession in Hainburg. Frankh called Sepperl, and showed him how to make the stroke....