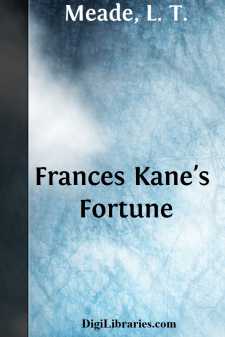 It was a very sunny June day, and a girl was pacing up and down a sheltered path in an old-fashioned garden. She walked slowly along the narrow graveled walk, now and then glancing at the carefully trimmed flowers of an elaborate ribbon border at her right, and stopping for an instant to note the promise of fruit on some well-laden peach and pear-trees. The hot sun was pouring down almost vertical rays on her uncovered head, but she was either impervious to its power, or, like a salamander, she rejoiced in its fierce noonday heat.

"We have a good promise of peaches and pears," she said to herself; "I will see that they are sold this year. We will just keep a few for my father to eat, but the rest shall go. It is a pity Watkins spends so much time over the ribbon border; it does not pay, and it uses up so many of our bedding plants."

She frowned slightly as she said these last words, and put up her hand to shade her face from the sun, as though for the first time she noticed its dazzling light and heat.

"Now I will go and look to the cabbages," she said, continuing her meditations aloud. "And those early pease ought to be fit for pulling now. Oh! is that you, Watkins? Were you calling me? I wanted to speak to you about this border. You must not use up so many geraniums and calceolarias here. I don't mind the foliage plants, but the others cost too much, and can not be made use of to any profit in a border of this kind."

"You can't make a ribbon, what's worthy to be called a ribbon, with foliage plants," gruffly retorted the old gardener. "Master would be glad to see you in the house, Miss Frances, and yer's a letter what carrier has just brought."

"Post at this hour?" responded Frances, a little eagerness and interest lighting up her face; "that is unusual, and a letter in the middle of the day is quite a treat. Well, Watkins, I will go to my father now, and see you at six o'clock in the kitchen garden about the cabbages and peas."

"As you please, Miss Frances; the wegitables won't be much growed since you looked at them yester-night, but I'm your sarvint, miss. Carrier called at the post-office and brought two letters: one for you, and t'other for master. I'm glad you're pleased to get 'em, Miss Frances."

Watkins's back was a good deal bent; he certainly felt the heat of the sun, and was glad to hobble off into the shade.

"Fuss is no word for her," he said; "though she's a good gel, and means well—werry well."

After the old gardener had left her, Frances stood quite still; the sun beat upon her slight figure, upon her rippling, abundant dark-brown hair, and lighted up a face which was a little hard, a tiny bit soured, and scarcely young enough to belong to so slender and lithe a figure. The eyes, however, now were full of interest, and the lips melted into very soft curves as Frances turned her letter round, examined the postmarks, looked with interest at the seal, and studied the handwriting. Her careful perusal of the outside of the letter revealed at a glance how few she got, and how such a comparatively uninteresting event in most lives was regarded by her....