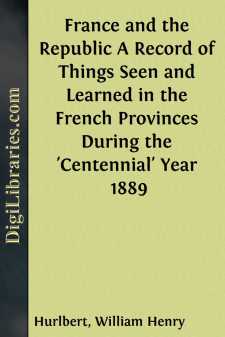 This volume is neither a diary nor a narrative. To have given it either of these forms, each of which has its obvious advantages, would have extended it beyond all reasonable limits. It is simply a selection from my very full memoranda of a series of visits paid to different parts of France during the year 1889.

These visits would never have been made, had not my previous acquaintance with France and with French affairs, going back now—such as it is—to the early days of the Second Empire, given me reasonable ground to hope that I might get some touch of the actual life and opinions of the people in the places to which I went. My motive for making these visits was the fact that what it has become the fashion to call 'parliamentary government,' or, in other words, the unchecked administration of the affairs of a great people by the directly elected representatives of the people, is now formally on its trial in France. We do not live under this form of government in the United States, but as a thoughtless tendency towards this form of government has shown itself of late years even in the United States and much more strongly in Great Britain, I thought it worth while to see it at work and form some notion of its results in France.

Republican Switzerland has carefully sought to protect herself against this form of government. The Swiss Constitution of 1874 reposes ultimately on the ancient autonomy of the Cantons. Each Canton has one representative in the Federal Executive Council. The members of this Council are elected for three years by the Federal Assembly, and from among their own number they choose the President of the Confederation, who serves for one year only—a provision probably borrowed from the first American Constitution. The Cantonal autonomy was further strengthened in 1880 by the establishment of the Federal Tribunal on lines taken from those of the American Supreme Court. There is a division of the Executive authority between the Federal Assembly and the Federal Council, which is yet to be tested by the strain of a great European war, but which has so far developed no serious domestic dangers.

The outline map which accompanies this volume will show that my visits, which began with Marseilles and the Bouches-du-Rhône, upon my return from Rome to Paris in January 1889, on the eve of the memorable election of General Boulanger as a deputy for the Seine in that month, were extended to Nancy in the east of France, to the frontiers of Belgium and the coasts of the English Channel in the north, to Rennes, Nantes, and Bordeaux in the west, and to Toulouse, Nîmes, and Arles in the south. I went nowhere without the certainty of meeting persons who could and would put me in the way of seeing what I wanted to see, and learning what I wanted to learn. I took with me everywhere the best books I could find bearing on the true documentary history of the region I was about to see, and I concerned myself in making my memoranda not only with the more or less fugitive aspects of public action and emotion at the present time, but with the past, which has so largely coloured and determined these fugitive aspects. Naturally, therefore, when I sat down to put this volume into shape, I very soon found it to be utterly out of the question for me to try to do justice to all that had interested and instructed me in every part of France which I had visited.

I have contented myself accordingly with formulating, in this Introduction, my general convictions as to the present condition and outlook of affairs in France and as to the relation which actually exists between the Third Republic, now installed in power at Paris, and the great historic France of the French people; and with submitting to my readers, in support of these convictions, a certain number of digests of my memoranda, setting forth what I saw, heard, and learned in some of the departments which I visited with most pleasure and profit.

In doing this I have written out what I found in my note-books less fully than the importance of the questions involved might warrant. But what I have written, I have written out fairly and as exactly as I could. I do not hold myself responsible for the often severe and sometimes scornful judgments pronounced by my friends in the provinces upon public men at Paris....