France and England in North America; a Series of Historical Narratives - Part 3 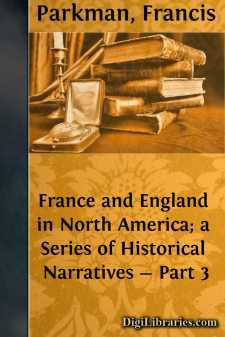 The discovery of the "Great West," or the valleys of the Mississippi and the Lakes, is a portion of our history hitherto very obscure. Those magnificent regions were revealed to the world through a series of daring enterprises, of which the motives and even the incidents have been but partially and superficially known. The chief actor in them wrote much, but printed nothing; and the published writings of his associates stand wofully in need of interpretation from the unpublished documents which exist, but which have not heretofore been used as material for history.

This volume attempts to supply the defect. Of the large amount of wholly new material employed in it, by far the greater part is drawn from the various public archives of France, and the rest from private sources. The discovery of many of these documents is due to the indefatigable research of M. Pierre Margry, assistant custodian of the Archives of the Marine and Colonies at Paris, whose labors, as an investigator of the maritime and colonial history of France can be appreciated only by those who have seen their results. In the department of American colonial history, these results have been invaluable; for, besides several private collections made by him, he rendered important service in the collection of the French portion of the Brodhead documents, selected and arranged the two great series of colonial papers ordered by the Canadian government, and prepared, with vast labor, analytical indexes of these and of supplementary documents in the French archives, as well as a copious index of the mass of papers relating to Louisiana. It is to be hoped that the valuable publications on the maritime history of France which have appeared from his pen are an earnest of more extended contributions in future.

The late President Sparks, some time after the publication of his life of La Salle, caused a collection to be made of documents relating to that explorer, with the intention of incorporating them in a future edition. This intention was never carried into effect, and the documents were never used. With the liberality which always distinguished him, he placed them at my disposal, and this privilege has been, kindly continued by Mrs. Sparks.

The map contained in the book is a portion of the great manuscript map ofFranquelin, of which an account will be found in the Appendix.

The next volume of the series will be devoted to the efforts of Monarchy and Feudalism under Louis XIV....