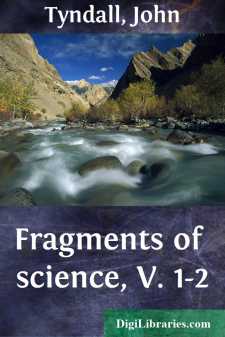 I. THE CONSTITUTION OF NATURE.

WE cannot think of space as finite, for wherever in imagination we erect a boundary, we are compelled to think of space as existing beyond it. Thus by the incessant dissolution of limits we arrive at a more or less adequate idea of the infinity of space. But, though compelled to think of space as unbounded, there is no mental necessity compelling us to think of it either as filled or empty; whether it is so or not must be decided by experiment and observation. That it is not entirely void, the starry heavens declare; but the question still remains, Are the stars themselves hung in vacuo? Are the vast regions which surround them, and across which their light is propagated, absolutely empty? A century ago the answer to this question, founded on the Newtonian theory, would have been, 'No, for particles of light are incessantly shot through space.' The reply of modern science is also negative, but on different grounds. It has the best possible reasons for rejecting the idea of luminiferous particles; but, in support of the conclusion that the celestial spaces are occupied by matter, it is able to offer proofs almost as cogent as those which can be adduced of the existence of an atmosphere round the earth. Men's minds, indeed, rose to a conception of the celestial and universal atmosphere through the study of the terrestrial and local one. From the phenomena of sound, as displayed in the air, they ascended to the phenomena of light, as displayed in the aether; which is the name given to the interstellar medium.

The notion of this medium must not be considered as a vague or fanciful conception on the part of scientific men. Of its reality most of them are as convinced as they are of the existence of the sun and moon. The luminiferous aether has definite mechanical properties. It is almost infinitely more attenuated than any known gas, but its properties are those of a solid rather than of a gas. It resembles jelly rather than air. This was not the first conception of the aether, but it is that forced upon us by a more complete knowledge of its phenomena. A body thus constituted may have its boundaries; but, although the aether may not be co-extensive with space, it must at all events extend as far as the most distant visible stars. In fact it is the vehicle of their light, and without it they could not be seen. This all-pervading substance takes up their molecular tremors, and conveys them with inconceivable rapidity to our organs of vision. It is the transported shiver of bodies countless millions of miles distant, which translates itself in human consciousness into the splendour of the firmament at night.

If the aether have a boundary, masses of ponderable matter might be conceived to exist beyond it, but they could emit no light. Beyond the aether dark suns might burn; there, under proper conditions, combustion might be carried on; fuel might consume unseen, and metals be fused in invisible fires....