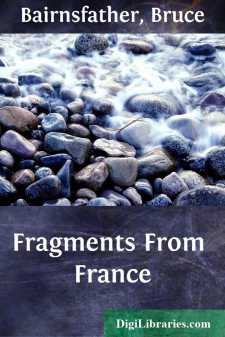 FOREWORD By the Editor of "The Bystander."   HEN Tommy went out to the great war, he went smiling, and singing the latest ditty of the halls. The enemy scowled. War, said his professors of kultur and his hymnsters of hate, could never be waged in the Tipperary spirit, and the nation that sent to the front soldiers who sang and laughed must be the very decadent England they had all along denounced as unworthy of world-power.

I fear the enemy will be even more infuriated when he turns over the pages of this book. In it the spirit of the British citizen soldier, who, hating war as he hated hell, flocked to the colours to have his whack at the apostles of blood and iron, is translated to cold and permanent print. Here is the great war reduced to grim and gruesome absurdity. It is not fun poked by a mere looker-on, it is the fun felt in the war by one who has been through it.

Captain Bruce Bairnsfather has stayed at that "farm" which is portrayed in the double page of the book; he has endured that shell-swept "'ole" that is depicted on the cover; he has watched the disappearance of that "blinkin' parapet" shown on one page; has had his hair cut under fire as shown on another. And having been through it all, he has just put down what he has seen and heard and felt and smelt and—laughed at.

Captain Bairnsfather went to the front in no mood of a "chiel takin' notes." It was the notes that took him. Before the war, some time a regular soldier, some time an engineer, he had little other idea than to sketch for mischief, on walls and shirt cuffs, and tablecloths. Without the war he might never have put pencil to paper for publication. But the war insisted.

It is not for his mere editor to forecast his vogue in posterity. Naturally I hope it will be a lasting one, but I am prejudiced. Let me, however, quote a letter which reached Captain Bairnsfather from somewhere in France:

"Twenty years after peace has been declared there will be no more potent stimulus to the recollections of an old soldier than your admirable sketches of trench life. May I, with all deference, congratulate you on your humour, your fidelity, your something-else not easily defined—I mean your power of expressing in black and white a condition of mind."

I hope that this forecast is a true one. If this sketch book is worthy to outlast the days of the war, and to be kept for remembrance on the shelves of those who have lived through it, it will have done its bit. For will it not be a standing reminder of the ingloriousness of war, its preposterous absurdity, and of its futility as a means of settling the affairs of nations?

CAPTAIN BRUCE BAIRNSFATHERThis picture was taken at the Front, less than a quarter of a mile from the German trenches. Captain Bairnsfather has come "straight off the mud," and is wearing a fur coat, a Balaclava helmet, and gum boots. Immediately behind him is a hole made by a "Jack Johnson" shell.

When the ardent Jingo of the day after to-morrow rattles the sabre, let there be somewhere handy a copy of "Fragments from France" that can be opened in front of him, at any page, just to remind him of what war is really like as it is fought in "civilised" times....