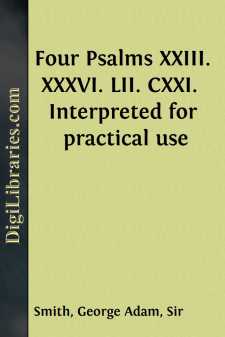 The twenty-third Psalm seems to break in two at the end of the fourth verse. The first four verses clearly reflect a pastoral scene; the fifth appears to carry us off, without warning, to very different associations. This, however, is only in appearance. The last two verses are as pastoral as the first four. If these show us the shepherd with his sheep upon the pasture, those follow him, shepherd still, to where in his tent he dispenses the desert's hospitality to some poor fugitive from blood. The Psalm is thus a unity, even of metaphor. We shall see afterwards that it is also a spiritual unity; but at present let us summon up the landscape on which both of these features—the shepherd on his pasture and the shepherd in his tent—lie side by side, equal sacraments of the grace and shelter of our God.

A Syrian or an Arabian pasture is very different from the narrow meadows and fenced hill-sides with which we are familiar. It is vast, and often virtually boundless. By far the greater part of it is desert—that is, land not absolutely barren, but refreshed by rain for only a few months, and through the rest of the year abandoned to the pitiless sun that sucks all life from the soil. The landscape is nearly all glare: monotonous levels or low ranges of hillocks, with as little character upon them as the waves of the sea, and shimmering in mirage under a cloudless heaven. This bewildering monotony is broken by only two exceptions. Here and there the ground is cleft to a deep ravine, which gapes in black contrast to the glare, and by its sudden darkness blinds the men and sheep that enter it to the beasts of prey which have their lairs in the recesses. But there are also hollows as gentle and lovely as those ravines are terrible, where water bubbles up and runs quietly between grassy banks through the open shade of trees.

On such a wilderness, it is evident that the person and character of the shepherd must mean a great deal more to the sheep than they can possibly mean in this country. With us, sheep left to themselves may be seen any day—in a field or on a hill-side with a far-travelling fence to keep them from straying. But I do not remember ever to have seen in the East a flock of sheep without a shepherd.

On such a landscape as I have described he is obviously indispensable. When you meet him there, 'alone of all his reasoning kind,' armed, weather-beaten, and looking out with eyes of care upon his scattered flock, their sole provision and defence, your heart leaps up to ask: Is there in all the world so dear a sacrament of life and peace as he?

There is, and very near himself. As prominent a feature in the wilderness as the shepherd is the shepherd's tent. To Western eyes a cluster of desert homes looks ugly enough—brown and black lumps, often cast down anyhow, with a few loutish men lolling on the trampled sand in front of the low doorways, that a man has to stoop uncomfortably to enter. But conceive coming to these a man who is fugitive—fugitive across such a wilderness....