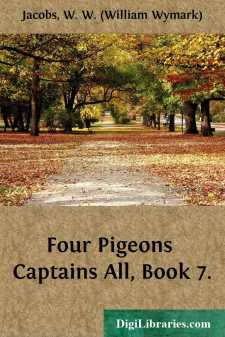 The old man took up his mug and shifted along the bench until he was in the shade of the elms that stood before the Cauliflower. The action also had the advantage of bringing him opposite the two strangers who were refreshing themselves after the toils of a long walk in the sun.

"My hearing ain't wot it used to be," he said, tremulously. "When you asked me to have a mug o' ale I 'ardly heard you; and if you was to ask me to 'ave another, I mightn't hear you at all."

One of the men nodded.

He looked round as the landlord approached, and pushed his mug gently in his direction. The landlord, obeying a nod from the second stranger, filled it.

"It puts life into me," said the old man, raising it to his lips and bowing. "It makes me talk."

"Time we were moving, Jack," said the first traveller. The second, assenting to this as an abstract proposition, expressed, however, a determination to finish his pipe first.

I heard you saying something about shooting, continued the old man, and that reminds me of some shooting we 'ad here once in Claybury. We've always 'ad a lot o' game in these parts, and if it wasn't for a low, poaching fellow named Bob Pretty—Claybury's disgrace I call 'im—we'd 'ave a lot more.

It happened in this way. Squire Rockett was going abroad to foreign parts for a year, and he let the Hall to a gentleman from London named Sutton. A real gentleman 'e was, open-'anded and free, and just about October he 'ad a lot of 'is friends come down from London to 'elp 'im kill the pheasants.

The first day they frightened more than they killed, but they enjoyed theirselves all right until one gentleman, who 'adn't shot a single thing all day, shot pore Bill Chambers wot was beating with about a dozen more.

Bill got most of it in the shoulder and a little in the cheek, but the row he see fit to make you'd ha' thought he'd been killed. He laid on the ground groaning with 'is eyes shut, and everybody thought 'e was dying till Henery Walker stooped down and asked 'im whether 'e was hurt.

It took four men to carry Bill 'ome, and he was that particular you wouldn't believe. They 'ad to talk in whispers, and when Peter Gubbins forgot 'imself and began to whistle he asked him where his 'art was. When they walked fast he said they jolted 'im, and when they walked slow 'e asked 'em whether they'd gone to sleep or wot.

Bill was in bed for nearly a week, but the gentleman was very nice about it and said that it was his fault. He was a very pleasant-spoken gentleman, and, arter sending Dr. Green to him and saying he'd pay the bill, 'e gave Bill Chambers ten pounds to make up for 'is sufferings.

Bill 'ad intended to lay up for another week, and the doctor, wot 'ad been calling twice a day, said he wouldn't be responsible for 'is life if he didn't; but the ten pounds was too much for 'im, and one evening, just a week arter the accident, he turned up at this Cauliflower public-'ouse and began to spend 'is money....