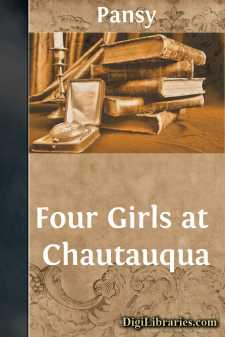 Eurie Mitchell shut the door with a bang and ran up the stairs two steps at a time. She nearly always banged doors, and was always in a hurry. She tapped firmly at the door just at the head of the stairs; then she pushed it open and entered.

"Are you going?" she said, and her face was all in a glow of excitement and pleasure.

The young lady to whom she spoke measured the velvet to see if it was long enough for the hat she was binding, raised her eyes for just an instant to the eager face before her, and said "Good-morning."

"Ruth Erskine! what are you trimming your hat for? Didn't it suit? Say, are you going? Why in the world don't you tell me? I have been half wild all the morning."

Ruth Erskine smiled. "Which question shall I answer first? What a perfect interrogation point you are, Eurie. My hats never suit, you know; this one was worse than usual. This velvet is a pretty shade, isn't it? Am I going to Chautauqua, do you mean? I am sure I don't know. I haven't thought much about it. Do you really suppose it will be worth while?"

Eurie stamped her foot impatiently. "How provoking you are! Haven't thought of it, and here I have been talking and coaxing all the morning. Father thinks it is a wild scheme, of course, and sees no sense in spending so much money; but I'm going for all that. I don't have a frolic once in an age, and I have set my heart on this. Just think of living in the woods for two whole weeks! camping out, and doing all sorts of wild things. I'm just delighted."

Miss Erskine sewed thoughtfully for some seconds, then she said:

"Why, there is nothing in the world to hinder my going if I want to. As to the money, I suppose one could hardly spend as much there as at Long Branch or Saratoga, and of course I should go somewhere. But the point is, what do I want to go for?"

"Why, just to be together, and be in the woods, and live in a tent, and do nothing civilized for a fortnight. It is the nicest idea that ever was."

"And should we go to the meetings?" Miss Erskine asked, still speaking thoughtfully, and as if she were undecided.

"Why, yes, of course, now and then. Though for that matter I suppose father is right enough when he says that precious few people go for the sake of the meetings. He says it is a grand jollification, with a bit of religion for the background. But for that matter the less religion they have the better, and so I told him."

At this point there was a faint little knock at the door, and Eurie sprang to open it, saying as she went: "That is Flossy, I know; she always gives just such little pussy knocks as that." The little lady who entered fitted her name perfectly. She was small and fair, blue-eyed, flossy yellow curls lying on her shoulders, her voice was small and sweet, almost too sweet or too soft, that sort of voice that could change when slight occasion offered into a whine or positive tearfulness. She was greeted with great glee by Eurie, and in her more quiet way by Miss Erskine.

"I'm going," she said, with a soft little laugh, and she sank down among the cushions of the sofa, while her white morning dress floated around her like a cloud....