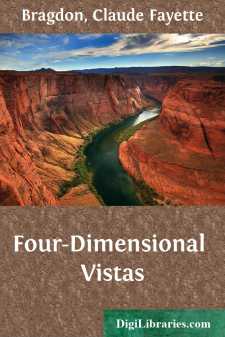 I THE QUEST OF FREEDOM THE UNDISCOVERED COUNTRY

Expectancy of freedom is the dominant note of to-day. Amid the crash of armies and the clash of systems we await some liberating stroke which shall release us from the old dreary thralldoms. As Nietzsche says, "It would seem as though we had before us, as a reward for all our toils, a country still undiscovered, the horizons of which no one has yet seen, a beyond to every country and every refuge of the ideal that man has ever known, a world so overflowing with beauty, strangeness, doubt, terror and divinity, that both our curiosity and our lust of possession are frantic with eagerness."

Should a name be demanded for this home of freedom, there are those who would unhesitatingly call it The Fourth Dimension of Space. For such readers as may be ignorant of the amazing content of this seemingly meaningless phrase, any summary attempt at enlightenment will lead only to deeper mystification. To the question, where and what is the fourth dimension, the answer must be, it is here—in us, and all about us—in a direction toward which we can never point because at right angles to all the directions that we know. Our space cannot contain it, because it contains our space. No walls separate us from this demesne, not even the walls of our fleshly prison; yet we may not enter, even though we are already "there." It is the place of dreams, of living dead men: it is At the Back of the North Wind and Behind the Looking Glass.

So might one go on, piling figure upon figure and paradox upon paradox, to little profit. The effective method is the ordered and deliberate one; therefore the author asks of his reader the endurance of his curiosity pending certain necessary preparations of the mind.

Could one of our aviators have landed in ancient Athens, doubtless he would have been given a place in the Greek Pantheon, for the old idea of a demigod was a man with wings. Why, then, does a flying man so little amaze us? Because we know about engines, and the smell of gasoline has dulled our sense of the sublime. The living voice of a dead man leaves us unterrified if only we can be sure that it comes from a phonograph; but let that voice speak to us out of vacancy and we fall a prey to the same order of alarm that is felt by a savage at the report of a gun that he has never seen.

This illustration very well defines the nature of a miracle: it is a manifestation of power new to experience, and counter to the current thought of the time, Miracles are therefore always in order, they always happen. It is nothing that the sober facts of to-day are more marvellous than the fictions of Baron Munchausen, so long as we understand them: it is everything that phenomena are multiplying, that we are unable to understand. This increasing pressure upon consciousness from a new direction has created a need to found belief on something firmer than a bottomless gullibility of mind. This book is aimed to meet that need by giving the mind the freedom of new spaces; but before it can even begin to do so, the reader must be brought to see the fallacy of attempting to measure the limits of the possible by that faculty known as common sense....