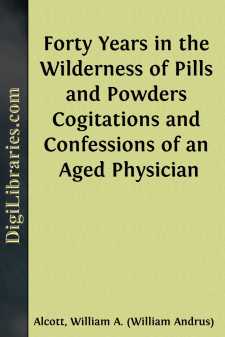 I was born in a retired but pleasant part of New England, as New England was half a century ago, and as, in many places, despite of its canals, steamboats, railroads, and electromagnetic telegraphs, it still is. Hence I am entitled to the honor of being, in the most emphatic sense, a native of the land of "steady habits."

The people with whom I passed my early years, though comparatively rude and uncultivated, were yet, in their manners and character, quite simple. Most of them could spell and read, and write their names, and a few could "cipher" as far as simple subtraction. To obtain the last-mentioned accomplishment, however, was not easy, for arithmetic was not generally permitted in the public schools during the six hours of the day; and could only be obtained in the occasional evening school, or by self-exertion at home.

The majority of my townsmen also knew something of the dream-book and of palmistry, and of the influence of the moon (especially when first seen, after the change, over the right shoulder), not only on the weather and on vegetation, but on the world of humanity. They also understood full well, what troubles were betokened by the howling of a dog, the blossoming of a flower out of due season, or the beginning of a journey or of a job of work on Tuesday or Friday. Many of them knew how to tell fortunes in connection with a cup of tea. Nay, more, not a few of them were skilled in astrology, and by its aid could tell under what planet a person was born, and perchance, could predict thereby the future events of his life; at least after those events had actually taken place.

Under what particular planet I was born, my friends never told me; though it is quite possible some of my sage grandmothers or aunts could have furnished the needful information had I sought it. They used to look often at the lines in the palms of my hands, and talk much about my dreams, which were certainly a little aspiring, and in many respects remarkable. The frequent prediction of one of these aged and wise friends I remember very well. It was, that I would eat my bread in two kingdoms. This prediction was grounded on the fact, that the hair on the top of my head was so arranged by the plastic hand of Nature as to form what were called two crowns; and was so far fulfilled, that I have occasionally eaten bread within the realms of Queen Victoria!

According to the family register, kept in the cranium of my mother, I was born on Monday, which doubtless served to justify the frequent repetition of the old adage, and its application to my own case—"Born on Monday, fair of face." I was also born on the sixth day of the month, on account of which it was said that the sixth verse of the thirty-first chapter of Proverbs was, prospectively, a key to my character. It is certainly true that I have dealt out not a little "strong drink to him that" was "ready to perish;" and that few of my professional brethren have furnished a larger proportion of it gratuitously; or as Solomom says, have given it.

Whether there was any clear or distinct prophecy ever uttered that I would one day be a knight of the lancet, clad in full armor, is not certain. If there was, I presume it was unwritten. That I was to be distinguished in some way, everybody appeared to understand and acknowledge. I was not only at the head of all my classes at school, in spelling, reading, and writing, but exalted above most of my competitors and compeers by a whole head and shoulders. In ciphering, in particular, I excelled. I understood the grand rules of arithmetic, and could even work a little in the Rule of Three.

That the thought of being a "doctor" did, in a sort of indefinable way, sometimes enter my head, even at that early period, I will not deny. One of my teachers, as I well remember, had medical books, into which bars and bolts could hardly prevent me from peeping. But there were a thousand lions in the way—or at least two or three. One was extreme indigence on the part of my parents. They came together nearly as poor as John Bunyan and his wife, or Sydney Smith and his companion. Or if, in addition to a knife, fork, and spoon, they had a looking-glass, an old iron kettle, an axe, and a hoe, I am sure the inventory of their property at first could not have extended much farther; and now that they had a family of four children, their wants had increased about as fast as their income....