Forty Years a Gambler on the Mississippi 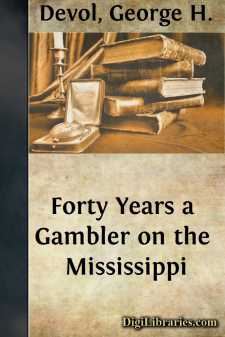 "I'll serve his youth, for youth must have his course,   For being restrained it makes him ten times worse;   His pride, his riot, all that may be named,   Time may recall, and all his madness tamed."

My Dear Reader: I first saw the light of day in a little town called Marietta, at the mouth of the Muskingum River in the State of Ohio, on the first day of August, 1829. I was the youngest of six children, and was the pet of the family. My father was a ship carpenter, and worked at boat-building in the beginning of the present century. I had good opportunities to secure an early education, as we had good schools in the West at that time. I had very little liking for books, and much less for school. When my parents thought me at school, I was playing "hookey" with other boys, running about the river, kicking foot-ball, playing "shinny on your own side," and having a fight nearly every day. I hardly ever went home that I did not have my face all scratched up from having been in a fight, which innocent amusement I loved much better than school. When I was hardly ten years of age, I would carry stones in my pocket and tackle the school teachers if they attempted to whip me. My father was away from home at his work most of the time, and my mother (God bless her dear old soul) could not manage me. She has often called in some passer-by to help her punish me. I can now see I richly deserved all the punishment I ever received, and more too. When there was company at our house, and my mother would be busy preparing a meal, I would get my bow and arrows and shoot the cups off from the table, and then run away. I guess I was about the worst boy of my age west of the Allegheny Mountains that was born of good Christian parents. I have often heard the good old church members say: "That boy will be hung if he lives to be twenty years old." But I have fooled them, and am still on the turf, although I have had some pretty close calls, as you will see by reading this book.

In the year 1839, while at the river one day, I saw a steamer lying at the wharf-boat by the name of Wacousta. The first steward said I could ship as a cabin boy at $4 per month. I thought this a great opportunity, so when the boat backed out I was on board without saying anything to my parents or any one else. My first duty was to scour knives. I knew they would stand no foolishness, so at it I went, and worked like a little trooper, and by so doing I gained the good will of the steward. At night I was told to get a mattress and sleep on the floor of the cabin; this I was very glad to do, as I was tired.

About four o'clock in the morning the second steward came up to me and gave me a pretty hard kick in the side that hurt me, and called out: "Get up here, and put your mattress away." I did get up and put away my bed, and then I went to the steward who kicked me and said: "Look here! Don't kick me that way again, for you hurt me." He let go and hit me a slap in the face that made my ears ring; so into him I pitched....