For Whom Shakespeare Wrote 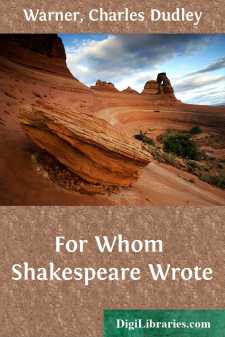 Queen Elizabeth being dead about ten o'clock in the morning, March 24, 1603, Sir Robert Cary posted away, unsent, to King James of Scotland to inform him of the "accident," and got made a baron of the realm for his ride. On his way down to take possession of his new kingdom the king distributed the honor of knighthood right and left liberally; at Theobald's he created eight-and-twenty knights, of whom Sir Richard Baker, afterwards the author of "A Chronicle of the Kings of England," was one. "God knows how many hundreds he made the first year," says the chronicler, "but it was indeed fit to give vent to the passage of Honour, which during Queen Elizabeth's reign had been so stopped that scarce any county of England had knights enow to make a jury."

Sir Richard Baker was born in 1568, and died in 1645; his "Chronicle" appeared in 1641. It was brought down to the death of James in 1625, when, he having written the introduction to the life of Charles I, the storm of the season caused him to "break off in amazement," for he had thought the race of "Stewards" likely to continue to the "world's end"; and he never resumed his pen. In the reign of James two things lost their lustre—the exercise of tilting, which Elizabeth made a special solemnity, and the band of Yeomen of the Guard, choicest persons both for stature and other good parts, who graced the court of Elizabeth; James "was so intentive to Realities that he little regarded shows," and in his time these came utterly to be neglected. The virgin queen was the last ruler who seriously regarded the pomps and splendors of feudalism.

It was characteristic of the age that the death of James, which occurred in his fifty-ninth year, should have been by rumor attributed to "poyson"; but "being dead, and his body opened, there was no sign at all of poyson, his inward parts being all sound, but that his Spleen was a little faulty, which might be cause enough to cast him into an Ague: the ordinary high-way, especially in old bo'dies, to a natural death."

The chronicler records among the men of note of James's time Sir Francis Vere, "who as another Hannibal, with his one eye, could see more in the Martial Discipline than common men can do with two"; Sir Edward Coke; Sir Francis Bacon, "who besides his profounder book, of Novum Organum, hath written the reign of King Henry the Seventh, in so sweet a style, that like Manna, it pleaseth the tast of all palats"; William Camden, whose Description of Britain "seems to keep Queen Elizabeth alive after death"; "and to speak it in a word, the Trojan Horse was not fuller of Heroick Grecians, than King James his Reign was full of men excellent in all kindes of Learning." Among these was an old university acquaintance of Baker's, "Mr. John Dunne, who leaving Oxford, lived at the Innes of Court, not dissolute, but very neat; a great Visitor of Ladies, a great frequenter of Playes, a great writer of conceited Verses; until such times as King James taking notice of the pregnancy of his Wit, was a means that he betook him to the study of Divinity, and thereupon proceeding Doctor, was made Dean of Pauls; and became so rare a Preacher, that he was not only commended, but even admired by all who heard him."

The times of Elizabeth and James were visited by some awful casualties and portents. From December, 1602, to the December following, the plague destroyed 30,518 persons in London; the same disease that in the sixth year of Elizabeth killed 20,500, and in the thirty-sixth year 17,890, besides the lord mayor and three aldermen. In January, 1606, a mighty whale came up the Thames within eight miles of London, whose body, seen divers times above water, was judged to be longer than the largest ship on the river; "but when she tasted the fresh water and scented the Land, she returned into the sea." Not so fortunate was a vast whale cast upon the Isle of Thanet, in Kent, in 1575, which was "twenty Ells long, and thirteen foot broad from the belly to the backbone, and eleven foot between the eyes....