For Every Music Lover A Series of Practical Essays on Music 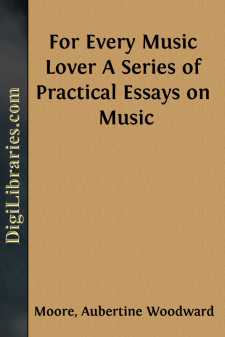 I The Origin and Function of Music

One of the most interesting of the many interesting stories of our civilization is the story of Music. It affords an intimate knowledge of the inner life of man as manifested in different epochs of the world's history. He who has failed to follow it has failed to comprehend the noblest phenomena of human progress.

Mythology and legendary lore abound in delightful traditions in regard to the birth of music. The untutored philosophers of primitive humanity and the learned philosophers of ancient civilizations alike strove to solve the sweet, elusive mystery surrounding the art. Through the myths and legends based on their speculations runs a suggestion of divine origin.

The Egyptians of old saw in their sublime god, Osiris, and his ideal spouse, Isis, the authors of music. Among the Hindus it was regarded as a priceless gift from the great god Brahma, who was its creator and whose peerless consort, Sarasvati, was its guardian. Poetic fancies in these lines permeate the early literature of diverse peoples.

This is not surprising. Abundant testimony proves that the existence of music is coeval with that of mankind; that it is based on the modulations of the human voice and the agitations of the human muscles and nerves caused by the infinite variations of the spiritual and emotional sensations, needs and aspirations of humanity; that it has grown with man's growth, developed with man's development, and that its origin is as divine as that of man.

The inevitable dualism which Emerson found bisecting all nature appears also in music, which is both spiritual and material. The spiritual part of music appeals to the spiritual part of man, addressing each heart according to the cravings and capacities of each. The material part of music may be compared to the body in which man's spirit is housed. It is the vehicle which conveys the message of music from soul to soul through the medium of the human ear with its matchless harp of nerve-fibres and its splendid sounding-board, the eardrum.

Music is the mirror which most perfectly reflects man's inner being and the essence of all things. Ruskin saw clearly that he alone can love art well who loves better what art mirrors. This may especially be applied to music, which offers, as a Beethoven has said, a more lofty revelation than all wisdom and philosophy.

Having no model in nature, being neither an imitation of any actual object, nor a repetition of anything experienced, music stands alone among the arts. It represents the real thing, as Schopenhauer has it, the thing itself, not the mere semblance. Were we able to give a thoroughly satisfactory explanation of music, he declares, we should have the true philosophy of the universe.

"Music is a kind of inarticulate, unfathomable speech, which leads us to the edge of the Infinite, and impels us for a moment to gaze into it," exclaimed Carlyle. Wagner found in music the conscious language of feeling, that which ennobles the sensual and realizes the spiritual. "Music is the harmonious voice of creation, an echo of the invisible world, one note of the divine concord which the entire universe is destined one day to sound," wrote Mazzini. Literature is rich in noble definitions of the divine art.

From a matter of fact standpoint music consists of a vast concourse of tones which are its raw materials and bear within themselves the possibility of being moulded into form....