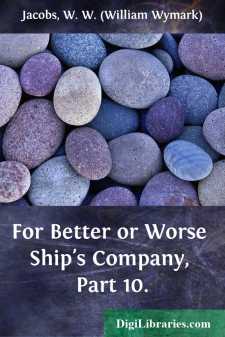 FOR BETTER OR WORSE

Mr. George Wotton, gently pushing the swing doors of the public bar of the "King's Head" an inch apart, applied an eye to the aperture, in the hope of discovering a moneyed friend. His gaze fell on the only man in the bar a greybeard of sixty whose weather-beaten face and rough clothing spoke of the sea. With a faint sigh he widened the opening and passed through.

"Mornin', Ben," he said, with an attempt at cheerfulness.

"Have a drop with me," said the other, heartily. "Got any money about you?"

Mr. Wotton shook his head and his face fell, clearing somewhat as the other handed him his mug. "Drink it all up, George," he said.

His friend complied. A more tactful man might have taken longer over the job, but Mr. Benjamin Davis, who appeared to be labouring under some strong excitement, took no notice.

"I've had a shock, George," he said, regarding the other steadily. "I've heard news of my old woman."

"She left me," said Mr. Davis, solemnly—"she left me thirty-five years ago. I went off to sea one fine morning, and that was the last I ever see of er.

"Why, did she bolt?" inquired Mr. Wotton, with mild interest.

"No," said his friend, "but I did. We'd been married three years—three long years—and I had 'ad enough of it. Awful temper she had. The last words I ever heard 'er say was: 'Take that!'"

Mr. Wotton took up the mug and, after satisfying himself as to the absence of contents, put it down again and yawned.

"I shouldn't worry about it if I was you," he remarked. "She's hardly likely to find you now. And if she does she won't get much."

Mr. Davis gave vent to a contemptuous laugh. "Get much!" he repeated. "It's her what's got it. I met a old shipmate of mine this morning what I 'adn't seen for ten years, and he told me he run acrost 'er only a month ago. After she left me—"

"But you said you left her!" exclaimed his listening friend.

"Same thing," said Mr. Davis, impatiently. "After she left me to work myself to death at sea, running here and there at the orders of a pack o'lazy scuts aft, she went into service and stayed in one place for fifteen years. Then 'er missis died and left her all 'er money. For twenty years, while I've been working myself to skin and bone, she's been living in comfort and idleness."

"What's that got to do with it?" demanded the other. "It was 'er dooty. She'd got money, and I ought to have 'ad my 'arf of it. Nothing can make up for that wasted twenty years—nothing."