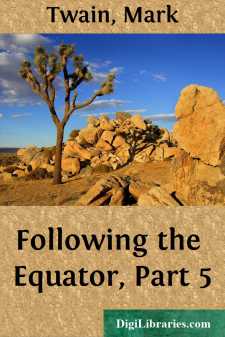 By trying we can easily learn to endure adversity. Another man's, I mean.

You soon find your long-ago dreams of India rising in a sort of vague and luscious moonlight above the horizon-rim of your opaque consciousness, and softly lighting up a thousand forgotten details which were parts of a vision that had once been vivid to you when you were a boy, and steeped your spirit in tales of the East. The barbaric gorgeousnesses, for instance; and the princely titles, the sumptuous titles, the sounding titles,—how good they taste in the mouth! The Nizam of Hyderabad; the Maharajah of Travancore; the Nabob of Jubbelpore; the Begum of Bhopal; the Nawab of Mysore; the Rance of Gulnare; the Ahkoond of Swat's; the Rao of Rohilkund; the Gaikwar of Baroda. Indeed, it is a country that runs richly to name. The great god Vishnu has 108—108 special ones—108 peculiarly holy ones—names just for Sunday use only. I learned the whole of Vishnu's 108 by heart once, but they wouldn't stay; I don't remember any of them now but John W.

And the romances connected with, those princely native houses—to this day they are always turning up, just as in the old, old times. They were sweating out a romance in an English court in Bombay a while before we were there. In this case a native prince, 16 1/2 years old, who has been enjoying his titles and dignities and estates unmolested for fourteen years, is suddenly haled into court on the charge that he is rightfully no prince at all, but a pauper peasant; that the real prince died when two and one-half years old; that the death was concealed, and a peasant child smuggled into the royal cradle, and that this present incumbent was that smuggled substitute. This is the very material that so many oriental tales have been made of.

The case of that great prince, the Gaikwar of Baroda, is a reversal of the theme. When that throne fell vacant, no heir could be found for some time, but at last one was found in the person of a peasant child who was making mud pies in a village street, and having an innocent good time. But his pedigree was straight; he was the true prince, and he has reigned ever since, with none to dispute his right.

Lately there was another hunt for an heir to another princely house, and one was found who was circumstanced about as the Gaikwar had been. His fathers were traced back, in humble life, along a branch of the ancestral tree to the point where it joined the stem fourteen generations ago, and his heirship was thereby squarely established. The tracing was done by means of the records of one of the great Hindoo shrines, where princes on pilgrimage record their names and the date of their visit. This is to keep the prince's religious account straight, and his spiritual person safe; but the record has the added value of keeping the pedigree authentic, too.

When I think of Bombay now, at this distance of time, I seem to have a kaleidoscope at my eye; and I hear the clash of the glass bits as the splendid figures change, and fall apart, and flash into new forms, figure after figure, and with the birth of each new form I feel my skin crinkle and my nerve-web tingle with a new thrill of wonder and delight....