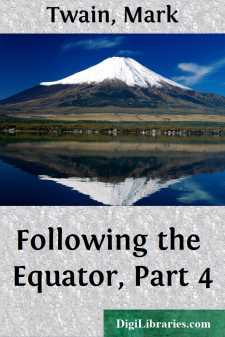 We spent part of an afternoon and a night at sea, and reached Bluff, in New Zealand, early in the morning. Bluff is at the bottom of the middle island, and is away down south, nearly forty-seven degrees below the equator. It lies as far south of the line as Quebec lies north of it, and the climates of the two should be alike; but for some reason or other it has not been so arranged. Quebec is hot in the summer and cold in the winter, but Bluff's climate is less intense; the cold weather is not very cold, the hot weather is not very hot; and the difference between the hottest month and the coldest is but 17 degrees Fahrenheit.

In New Zealand the rabbit plague began at Bluff. The man who introduced the rabbit there was banqueted and lauded; but they would hang him, now, if they could get him. In England the natural enemy of the rabbit is detested and persecuted; in the Bluff region the natural enemy of the rabbit is honored, and his person is sacred. The rabbit's natural enemy in England is the poacher, in Bluff its natural enemy is the stoat, the weasel, the ferret, the cat, and the mongoose. In England any person below the Heir who is caught with a rabbit in his possession must satisfactorily explain how it got there, or he will suffer fine and imprisonment, together with extinction of his peerage; in Bluff, the cat found with a rabbit in its possession does not have to explain—everybody looks the other way; the person caught noticing would suffer fine and imprisonment, with extinction of peerage. This is a sure way to undermine the moral fabric of a cat. Thirty years from now there will not be a moral cat in New Zealand. Some think there is none there now. In England the poacher is watched, tracked, hunted—he dare not show his face; in Bluff the cat, the weasel, the stoat, and the mongoose go up and down, whither they will, unmolested. By a law of the legislature, posted where all may read, it is decreed that any person found in possession of one of these creatures (dead) must satisfactorily explain the circumstances or pay a fine of not less than L5, nor more than L20. The revenue from this source is not large. Persons who want to pay a hundred dollars for a dead cat are getting rarer and rarer every day. This is bad, for the revenue was to go to the endowment of a University. All governments are more or less short-sighted: in England they fine the poacher, whereas he ought to be banished to New Zealand. New Zealand would pay his way, and give him wages.